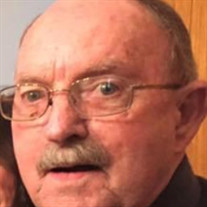 William “Bill” O. Sheets, 80, of Cheyenne passed from this life on October 8th after a brief illness. Bill was born on September 23rd, 1941 in Kannapolis, North Carolina. Bill spent his youth hunting, fishing, and exploring the hills and countryside with his brother Charles. The love of the great outdoors he developed in his youth stayed with him for rest of his days. After graduating high school, Bill served in the United States Air Force, which brought him to FE Warren AFB and Cheyenne, where he met his wife Alice. He became father to her previous three children, and together they had three more children to form a lively and loving family of eight. After being honorably discharged from the Air Force, Bill began a distinguished career with the Union Pacific Railroad, starting out as a laborer and eventually working his way up to Roadmaster over large regions of track in Wyoming and surrounding states. Throughout his career with the railroad, Bill moved around the Pacific Northwest and West Coast, eventually settling back in Cheyenne. Bill was diligent in his work and helped keep the lines open in all manner of weather and circumstances. In his long career with the railroad, there wasn’t much having to do with trains that Bill didn’t see or do. Bill retired from the Union Pacific after 30 years of dedicated service. Bill loved hunting, camping, and fishing and his family will always cherish those times that they were able to do those things with him. He also loved sports, and he would spend his later years enjoying the Denver Broncos and Wyoming Cowboys with his kids and grandkids. Bill is survived by his brother and sister in-law, Charles, and Carol Sheets, of Kernersville, NC; three stepchildren, Dennis Barrington and Melton Sanchez of Cheyenne, and Bernice Mask of Clovis, NM; daughters, Sherry (Jack) Keller of Fort Lupton, CO and Penney (Marc) Hernandez of Plain City, UT. He is also survived by numerous nephews, nieces, and grandchildren. Bill was preceded in death by his parents; his loving wife, Alice; son, Bobby; and a son in-law, Robert Mask. Bill’s viewing will be Monday, October 18, at Wiederspahn-Radomsky Chapel from 10:00 a.m. to 4:00 p.m. A Vigil for the Deceased and Rosary will also be Monday, October 18, at 5:00 p.m. in Wiederspahn-Radomsky Chapel. The Funeral Liturgy will be Tuesday, October 19, at Holy Trinity Catholic Church at 10:00 a.m., with the interment to follow at Olivet Cemetery with Military Honors.

The family of William O Sheets created this Life Tributes page to make it easy to share your memories.

Send flowers to the Sheets family.