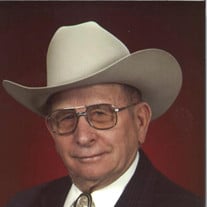 William E. Dew, 94, our gentleman and cowboy, went to his heavenly home to join his beloved Arlene on July 21, 2020, surrounded by members of his family. He was born in Wood Lake, Nebraska, in 1925, to Harvey and Bernice Dew, and as a child lived through the worst of the Great Depression. But hard times did not make him a hard man. He faced life’s challenges with unerring fairness, a steady hand and true compassion. He loved the ranch life, auctioneering, and no one provided more lovingly for their family. His sweet spirit and tender heart touched family, friends and strangers. Anyone who encountered Bill had a story to tell that reflected his thoughtful character, good nature and wry wit. Bill met Arlene Schmidt on the Howard Lamoureaux Ranch in Northern Nebraska, and they married June 4, 1950, beginning a life together that spanned 64 years. Their early years included time in Montana at auctioneer school and ranching north of Mission, SD. They raised five children and built a reputation for hard work, honesty and integrity. As foreman of the Claude Lamoureaux L7 Ranch near Mission, Bill became a friend to all and a mentor to many, including Duff and Kathy Tenant and Dan and Sandy Clapper. Friendships from the Mission, Valentine and Broken Bow communities followed him throughout his life, and he valued each one. His word was gold, and he treated everyone alike – with kindness, understanding and generosity. Fifty years after leaving Mission, his name is still held in high regard. After more than 25 years at the L7, Bill and Arlene moved to Broken Bow, NE, where he worked with the Prosser Cattle Company and Oconto Livestock Company until retirement. In 2001, Bill and Arlene relocated to Cheyenne, Wyoming, to be near Jan and family, where he was active in the congregation and preschool at Good Shepherd Lutheran Church and helped ride herd on his grandchildren. He treasured his friendship with Dick and Marg Mau that endured until his passing. When Arlene became ill with Alzheimer’s disease, he cared for her, first at home, then spending every day at her side in assisted living and then at Life Care, until in October 2014 she died peacefully holding his hand. In 2019, Bill required more assistance than Jan and Mike could provide at home, and he moved first to Sierra Hills, then Life Care, and spent his final days at Davis Hospice Center. His quirky personality and kind disposition made him a favorite of his caregivers at home – Andrea McHenry, Debbie Sitton - and Leland Sanders who followed his care until he passed, and all those at Sierra Hills, Life Care and Davis Hospice who lovingly helped him through his journey. Bill’s legacy lives on in children Charlene Dew, Kristi Dew, Jan (Mike) Davis, Will (Fonda) Dew; grandchildren Courtney Martinez and Chad Lower, Trevor, Matthew and Kailie Harris, and Aaron Hengst; seven great-grandchildren and numerous nieces and nephews; sisters Rozella (Randall) Duncan and Gloria Peterson. He was preceded in death by wife Arlene, daughter Linda (Gary) Hengst, parents Harvey and Bernice Dew, brothers Leo and Leonard Dew and infant sister Edna Dew. Cremation has taken place under the care of Wiederspahn Radomsky Chapel of the Chimes (wrcfuneral.com). Interment and a memorial service will be held in Valentine, NE, at a future date. Memorials may be made to Davis Hospice Center, 6000 Sycamore Street, Cheyenne, WY, 82009.

William E. Dew, 94, our gentleman and cowboy, went to his heavenly home to join his beloved Arlene on July 21, 2020, surrounded by members of his family. He was born in Wood Lake, Nebraska, in 1925, to Harvey and Bernice Dew, and as a child... View Obituary & Service Information

The family of William Ernest Dew created this Life Tributes page to make it easy to share your memories.

William E. Dew, 94, our gentleman and cowboy, went to his heavenly...

Send flowers to the Dew family.