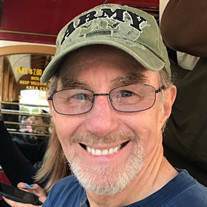 Wilfred A. “Fred” Landry, 73, of Cheyenne, died on Tuesday, October 5, 2021 in Cheyenne. He was born on February 28, 1948 in Lynn, Massachusetts. Fred was a Veteran of two wars, Vietnam and Desert Strom. He served in the Air Force during the Vietnam conflict in a medivac unit and worked for the Army National Guard before, during, and after Desert Storm until he was medically discharged because of his limited eyesight. Fred had a curiousness about him that made him want to know a lot about many different things. He was our in-house carpenter, plumber, and computer director. He most enjoyed his time with family and friends and found comfort in attending services at the Timberline Church in Fort Collins, Colorado. Fred is survived by his wife, Pam; two daughters, Heidi (Chris) Ketterman, Christine Landry; one granddaughter, Avery Burkhardt; three brothers, Edwin, John, and David Landry all from Salem, New Hampshire. He was preceded in death by his parents Wilfred and Anita Landry and numerous aunts and uncles. The family would like to express enormous gratitude to the VA Chemo and Infusion Center. Without their care and concern, Fred would not have experienced the quality of life he had during this last year. In lieu of flowers or other donations, the family requests that you might consider donating blood. Numerous, anonymous donors extended Fred’s life well beyond the expected timeline when he was first diagnosed with MDS, thirteen months ago, by their selfless gift of blood and platelet donations. Services will be Friday, October 15, 2021, at 10:30 a.m., at Wiederspahn-Radomsky Chapel, with burial at the Cheyenne National Cemetery at a later date. To view a live webcast of the services and to send the family condolences please visit his obituary page at www.wrcfuneral.com.

The family of Wilfred A. Landry created this Life Tributes page to make it easy to share your memories.

Send flowers to the Landry family.