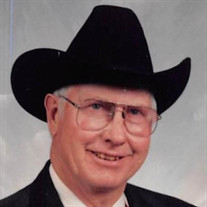 Wayne Anderson Flygstad, 92, passed away peacefully on October 24, 2021. Wayne was born August 15, 1929, the fourth child of Oscar and Ida Flygstad. He married Dorothy Rosel in August of 1953, and they had four children. In 1985 Wayne married Babs Reynolds and moved to Cheyenne, Wyoming. Wayne always thought he was a reincarnated cowboy and loved his life in Cheyenne. He enjoyed horseback riding, elk hunting, traveling, barbecuing, and entertaining, but he was happiest when he was camping in the mountains. Wayne enlisted in the Army at the age of 18. He served as in infantryman in the Korean Conflict and attained the rank of corporal. He was also a farmer, raising livestock and row crops. In January of 1968 he joined the Moorman’s Feed Company selling livestock feed. Wayne was named one of the top 100 salesmen in the country during his 21-year career with Moorman’s. After retiring from Moorman’s in May of 1989 he worked for the Laramie County School District delivering meals to the schools and worked his way up to warehouse manager. Wayne also worked as a night watchman for the Wyoming Legislature when it was in session. Wayne was preceded in death by his parents, Oscar and Ida Flygstad; his three siblings, Owen, Ione and Orlyn; his son Kevin, and his beloved wife Babs. He is survived by his children, Kathy Scheer; Kendal Flygstad (Cyndie); and Kelly Flygstad. He also leaves behind Joy Torelli, his companion of many years, and stepdaughters Donna Morgan, Mona Morgan, Gail Filkins (Jeb) and Kathy Sciole, along with many nieces, nephews, grandchildren and great-grandchildren. Services will be held at 2 p.m. on November 6, 2021, at Wiederspahn-Radomsky Chapel, 1900 East 19th Street, Cheyenne, Wyoming. The service will be live streamed at www.wrcfuneral.com beginning at 2:00 pm MT. In lieu of flowers, the family requests donations to Davis Hospice in Cheyenne or Wounded Warriors. Go rest high on that mountain!

Wayne Anderson Flygstad, 92, passed away peacefully on October 24, 2021. Wayne was born August 15, 1929, the fourth child of Oscar and Ida Flygstad. He married Dorothy Rosel in August of 1953, and they had four children. In 1985 Wayne married... View Obituary & Service Information

The family of Wayne Anderson Flygstad created this Life Tributes page to make it easy to share your memories.

Send flowers to the Flygstad family.