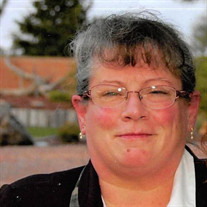 Vivian Leanne Johnson, 70, of Cheyenne, passed away at Cheyenne Medical Center on July 18th, 2021 surrounded by her loving family. She was born on March 23rd, 1951, Cheyenne, Wy to William Jennings and Bertina Diane “Browne” Bryan. Vivian grew up in Cheyenne and graduated from East High School in 1969. She married Robert “Bob” Johnson in 1975 and was blessed with their daughter Kiffaney in 1977. She worked various jobs over the years including bartending, worked for a coal mining company and even joined the circus briefly. She attended L.C.C.C where she attained a degree in Criminal Justice. While going to college she took an interest in astronomy and has been gazing upward ever since. Vivian worked at Cheyenne Transitional Center for a brief time as well. She eventually settled into cosmetology where she found her gift. She worked at Cost Cutters for several years and finally, after many years, retired from Great Clips where she had a very devoted clientele and beloved co-workers. She was a member of the Women’s Auxiliary of American Legion Post 6, member of Women’s Auxiliary of the V.F.W. 1881, a lifetime member of the Moose Lodge 257 Chapter #1133, and a member of the D.A.R. (Daughters of the American Revolution). Vivian was a feisty, adventurous, giving and loving woman, never afraid to speak her mind. She loved to read, garden, go to concerts and parades, music and her beloved kitties. She was full of life and her beautiful smile and bubbly personality showed it. Her presence here on earth will be greatly and deeply missed beyond words. The world is dimmer without your smile to brighten the day and your silly dances to laugh at. We love you, always and forever. She is survived by the love of her life, Bobby Lee; brother, William “Bill” (Audrey) Bryan; daughter, Kiffaney (Tyrone) Johnson; grandchildren, DiAnna, Keith, Robert Richardson, and Leah Lee. Services will be held Friday July 23rd at 10:00am at Wiederspahn Radomsky Chapel of the Chimes.

The family of Vivian Leanne Johnson created this Life Tributes page to make it easy to share your memories.

Vivian Leanne Johnson, 70, of Cheyenne, passed away at Cheyenne...

Send flowers to the Johnson family.