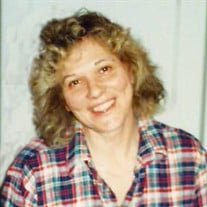 Twila Dawn Perry (Marshall), 80, of Cheyenne, passed away December 27, 2021 at Life Care Center of Cheyenne. Twila was born on September 17, 1941 in Bascom, Ohio to Alva Richard Marshall and Agnes Jeanette Marshall (Haugh). Together they had a total of nine children. Alva Marshall was a welder, owning his own business in Bascom up until his death. Her father passed away in Bascom, Ohio on July 30th, 1949. Twila was just 7 years old at the time. Her mother, Agnes Jeanette, passed away on March 10, 2000 in LaPorte, Colorado. She grew up in Bascom and moved to Virginia, where she had her children, and lived there for many years. She moved back to Ohio with her children, then moved to the Colorado area where she worked for the Teledyne Waterpik Company for several years. Her first three children; Dianna Marie (February 25, 1958), Thomas Richard (January 9, 1959), and Robert Lynnwood (December 13, 1959) were all born in Richmond City, Virginia. She had two grandchildren from her daughter, Dianna, Desiree Stugart-Parrish and Dustin Stugart, and two grandchildren from her son, Thomas, Ressa Flores (Seifert) and Heath Seifert. Her husband, David Perry, and her adopted their son Tony Perry in 1991. They also adopted their great-granddaughter, Brianna Perry, January 13th, 2005. Twila Dawn Perry (Marshall) and David Lawrence Perry were married April 24th, 1981 in Cheyenne, Wyoming in the witness of their two close friends, Michael and Gloria Sandberg. They then moved to Denver, Colorado. There, Twila attended Barnes Business School and she obtained her Certified Public Accounting Degree. They resided in Denver, Colorado until October 1982, when they returned to Cheyenne, Wyoming. They have resided in Cheyenne for 40 years. Together, they started D & T Garage Door Service in Cheyenne, a business that they owned and operated for 40 years. Twila functioned as President of the company from 1994-2010. In 1994, they were surveyed to be the best performing garage door outfit by three major door and operator manufacturers within a three-state region. They have served many customers over the years, that were always met with a friendly face when it came to meeting Twila in their office. Twila enjoyed operating her small business with her husband, mainly taking on duties of customer service, and keeping of books using her accounting knowledge. She also enjoyed cooking, sewing, crafting, and the outdoors. Her favorite outdoor activities included skiing, swimming, hiking, fishing, and boating. Twila could often be found during the summer in her garden outside, tending to her flower beds. She was also handy with tools, and she was never afraid to get her hands dirty. She passed her love of cooking, sewing, and crafting onto her children and grandchildren. Twila also loved to play cards and enjoyed going to the casino with her friends and family where they would all have a fun time together. She traveled many places throughout her lifetime, her favorite trip was to the Great Cayman Islands with her husband, David, and two close friends, Rodney and Anne Gillett of Arizona, where they were greeted with a terrible blizzard upon their return. She also had a tremendous love for animals, owning many pets throughout her lifetime such as dogs, Reggie, Duchess, Zeke and Lucky and cats, Pewter and Zoom-Zoom. She also loved her daughter’s cat, Misty. She is survived by her loving husband of 40 years, David Perry; children, Brianna Perry, Tony Perry, Robert Seifert, and Thomas Seifert; brothers, Timothy Marshall and Verro (Pete) Marshall and sister, Nannette Loewen (Marshall): grandchildren, Soriah Perry, Aiden Perry, Aspen Perry, Reesa Flores, Heath Seifert, Desiree Stugart-Parrish, and Dustin Stugart, six great-grandchildren, as well as many nieces and nephews. She is preceded in death by her parents; brothers, Gene Richard Marshall, Gerald (Gerry) Marshall, and Thomas Theodore Marshall, and her daughter, Dianna Marie Stugart-Gillooly. At her request, no memorial service will be held. She was a blessing to everyone, and her family and friends will miss her tremendously.

Twila Dawn Perry (Marshall), 80, of Cheyenne, passed away December 27, 2021 at Life Care Center of Cheyenne. Twila was born on September 17, 1941 in Bascom, Ohio to Alva Richard Marshall and Agnes Jeanette Marshall (Haugh). Together they had... View Obituary & Service Information

The family of Twila Dawn (Marshall) Perry created this Life Tributes page to make it easy to share your memories.

Send flowers to the Perry family.