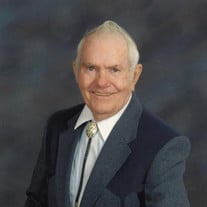 Thomas (Tom) Benson, 87, of Cheyenne, Wyoming passed at Davis Hospice Center in Cheyenne. He was born January 28, 1933 in Cheyenne. Funeral Liturgy will be Tuesday October 27th at 3pm at Holy Trinity Catholic Church. Interment of his urn will... View Obituary & Service Information

The family of Thomas E. Benson created this Life Tributes page to make it easy to share your memories.

Send flowers to the Benson family.