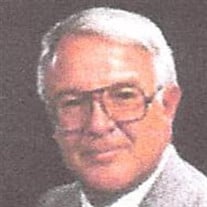 Theodore Charles "Ted" Gertsch, 87, of Cheyenne, died on Sunday, June 6, 2021 in Cheyenne. He was born on December 3, 1933 in Holyoke, Colorado, and served in the U.S. Army before attending the University of Wyoming, receiving his Civil Engineering Degree with Honor, in May of 1962.Ted served for four years with the University of Wyoming (IW) Physical Plant and four years as a full-time instructor in the Department of Civil and Architectural Engineering. He also served UW as an adjunct professor in the department from 1995-1998. Ted cofounded Gertsch/Baker and Associates in Laramie, Wyoming in 1973, and was actively involved in the company for many years. Along with consulting, he was involved with the Laramie City Council for six years, serving as mayor for two years during that same time. He was active with the Wyoming Senate for one year, Laramie Kiwanis, Laramie Chamber of Commerce, and the Boy Scouts of America. Through 2019 Ted served as a member of the City of Cheyenne Housing and Community Development Committee and also was involved in the Parent Advisory Committee for Laramie County School District #1 of Cheyenne. In recent years, Ted enjoyed meeting his coffee buddies every morning and discussing building projects and doing crosswords. Ted was an accomplished woodworker and almost always had a project going. Ted was a friend to so many and was good and kind. His family and friends here will miss him, but he is no in his forever home with the LORD and those family members that preceded him. Ted is survived by his sister, Shirley Schneider of Lakewood, Colorado; sister-in-law, Bobbie Gertsch of Cheyenne; hisbrother Carol Gertsch (Yvonne) of Loveland, Colorado; and many nieces, nephews, and special friends. Ted was preceded in death by his parents, Helen and Paul Gertsch; and by his brothers, Clifford and Marvin Gertsch. A small, close family and friend service (per Ted's wishes) will be held at Cheyenne Hills Church. In lieu of flowers, please make a donation in Ted's memory to the Cheyenne Animal Shelter.

Theodore Charles "Ted" Gertsch, 87, of Cheyenne, died on Sunday, June 6, 2021 in Cheyenne. He was born on December 3, 1933 in Holyoke, Colorado, and served in the U.S. Army before attending the University of Wyoming, receiving his Civil Engineering... View Obituary & Service Information

The family of Theodore Charles "Ted" Gertsch created this Life Tributes page to make it easy to share your memories.

Send flowers to the Gertsch family.