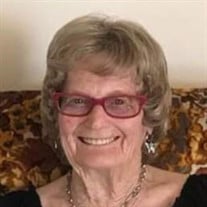 Thelma Jean Harrell, 89, of Cheyenne died on December 21, 2021, in Cheyenne. She was born March 20, 1932, in Cheyenne. Mrs. Harrell was a secretary for Mountain Bell Telephone & Telegraph Company after High School where she met and married James Edmund Harrell. She then was a homemaker until their children were in their teen years. Thelma then went to work as a Medical Records Technician at CRMC and later at F E Warren AFB Hospital. Thelma was a life-long member of Faith United Methodist Church, and Eastern Star. She was also a member of X-JWC philanthropic group, and she loved playing Bunco with these ladies as well as the Wild Women Bunco club. Thelma was always busy and actively involved in activities with her children. Jim entered into the Army in 1960 and the family began the adventure of moving around the world with his career. Thelma supported Jim in his career, and she was always the gracious hostess for his Unit parties and gatherings. Thelma loved to bake, and Christmas was her favorite Season because of all the cookies, candies and decorations. Thelma and Jim belonged to Good Sam and loved to travel in their conversion van. The family traveled all over Germany and Holland while stationed in Germany with the army. They lived in many states as the army moved Jim from Post to Post. They were married for 43 years before Jim’s passing. Thelma is survived by her daughter, Melanie (Chuck) Burger of Cheyenne, Son, Randy (Sara) Harrell of Kill Devil Hills NC, 1 brother, Ross Peery of Cheyenne, 2 Granddaughters, Kim (Brian) Jenkins of Ontario CA, and Tracey (Tim) Welch of NC, two Great-Grandsons, Tyler and Travis Jenkins, and many nieces, nephews, and cousins. She was preceded in death by her parents, Charles LeRoy (Shorty) and Sarah Lavenia (Ross) Peery, 2 brothers, Arthur LeRoy and Earl David Peery, 1 sister, Mary Lou (Peery) English, and Her beloved Jim. Services will be Wednesday, December 29th at 10:00 am at Wiederspahn-Radomsky Chapel with burial to follow in Cheyenne Memorial Gardens. A reception will immediately follow the burial at The Gathering Place.

Thelma Jean Harrell, 89, of Cheyenne died on December 21, 2021, in Cheyenne. She was born March 20, 1932, in Cheyenne. Mrs. Harrell was a secretary for Mountain Bell Telephone & Telegraph Company after High School where she met and married... View Obituary & Service Information

The family of Thelma Jean Harrell created this Life Tributes page to make it easy to share your memories.

Send flowers to the Harrell family.