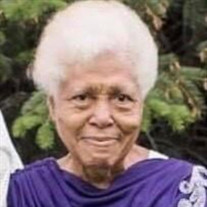 Thelma Vernalee Doss, 96, of Cheyenne, died on January 3, 2022 in Cheyenne. She was born on February 3, 1925 in Nacogdoches, Texas. Thelma was a devoted wife and mother. Her greatest joy in this world was serving her Lord and Savior, Jesus Christ. That love and her servants’ heart was evidenced as she lived her entire life caring for and giving to others. Thelma, along with her husband Jeff, served as a foster parents for 43 years, caring for over 4,000 children while raising her own family. Thelma was a walking testament to her faith. The lives she has touched is so far reaching that it’s truly immeasurable . Thelma enjoyed her time in church and could always be found right up front praising His Name with her tambourine. Thelma also enjoyed gathering with friends for prayer, fellowship, and coffee. Her grandchildren and great grandchildren were the apple of her eye and she cherished her time with them. She never missed an opportunity to fix them all breakfast before school or to see them off on their buses. Her family was everything to her. Thelma was more than a mother and a grandmother. She was a true Matriarch, and her legacy will live on through the wisdom, love and care that she so tirelessly poured into her family and those around her. She is survived by her two sisters, Dorothy Faye Latham of Cheyenne Wyoming and Queen Ester (Beauty) of Kaufman Texas; two sons, Rev. Don Doss and his wife Shelly Doss, and Danyl Leviege and his wife Peggy, all of Cheyenne; two daughters, Cathy Doss of Las Vegas, Nevada and Jessica Yost of Cheyenne, Wyoming; seven granddaughters, Misty (Doss) Robinson and her husband Chris Robinson, Brandie (Doss) Moulton and Jazmin Doss, all of Cheyenne, Desirea Snyder and Doria Jensen of Nebraska, and Kaylena Taylor and Tanisha Taylor of Cheyenne Wyoming; seven grandsons, Jeremiah Doss of Denver, Colorado, Tyrone Doss of Cheyenne, Wyoming, Dorian Doss, Danyl Doss of Nebraska, Darrel Harris of Missouri, and Sergio Taylor and Cyrus Taylor of Cheyenne, Wyoming; four great granddaughters, Macheala, Aribella and Presley Moulton, and Jaenai Robinson, all of Cheyenne; one great grandson. Travaras Robinson of Cheyenne; a host of nieces and nephews. She was preceded in death by her father, Jessie McQueen; mother, Lula Mae McQueen; two daughters, Debra (Doss) Whitmore and Tanisha (Doss) Taylor; four brothers, Mason Mcqueen, James Mcqueen, Melvin Mcqueen, and Walter Mcqueen all of Texas; and three sisters, Velma, Mary, and Leatha Mcqueen of Texas. Services will be Saturday, 1:00 p.m., at Holy Temple Church of God in Christ.

Thelma Vernalee Doss, 96, of Cheyenne, died on January 3, 2022 in Cheyenne. She was born on February 3, 1925 in Nacogdoches, Texas. Thelma was a devoted wife and mother. Her greatest joy in this world was serving her Lord and Savior, Jesus... View Obituary & Service Information

The family of Thelma Vernalee Doss created this Life Tributes page to make it easy to share your memories.

Send flowers to the Doss family.