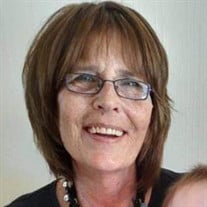 Terri Lyn (Kline) Hammons was called home on March 14, 2021 at 4:11 p.m. She was born in Lafayette, IN on July 24,1954. She is a daughter to Marilyn Dalton and John Kline. Terri was an amazing big sister to John (Marian) Kline, Jana (Roger) Madison, Brenda (Al) Fejes, Dawn (Glenn) Fadden, Denise Tuszynski, Marlowe (Tom) Allis and Beverly (Steve) Wilson. Terri graduated from North Newton in Enos, IN in 1972. She grew up in Morocco, IN and then lived with her best friend, Jean Morgan Adams. Then she moved to Grandview, MO, where she lived with her other best friend, Sandy Malolo, who introduced Terri to the love of her life, Kenneth Lee Hammons in Kansas City, MO. Terri and Kenneth moved to Wyoming and married on December 31, 1981. Terri was always such a hard worker. From the Owl Inn, the Hitching Post Inn and at Lowes DC where she was finally able to retire in August of 2020. She met so many of her closest friends through her jobs, whom she held so very close to her heart. Terri was such an amazing friend to everyone and always had a shoulder to cry on or a lending ear to listen. Terri's smile and personality lit up any room she walked into. Terri had such a passion for reading. She enjoyed going bowling and going on adventure drives. She loved having game nights with her family and playing boggle with her daughter. Terri loved when her children would get together and shared laughter. She always drank coffee but never without her French Vanilla creamer. She enjoyed getting her hair done and looked forward to her afternoon naps. Terri started to enjoy TV more once she retired and Friends, Will and Grace and Law and Order were some of her favorites. Terri adored spending time with her grandchildren and watching them at all of their extracurricular activities, especially baseball. Terri is survived by her stepmother, Pat Kline, her three children, Zachary Chase (Sarah), Jordyn Nicole (Shawn) and Travis William (Jordan). Terri was a wondrous mother and an extraordinary grandma to Kaelin, Jakub, Jacinda, Jonaven, Nolan, Nicholas and Silas and the one and only Maws to Bret, Jaxson, Karsen and Harper. She was also survived by numerous cousins, nieces and nephews. Terri is preceded in death by her beloved husband, Kenneth Hammons, her mother, Marilyn Dalton and her father, John Milton Kline. Terri will be so dearly missed but her love she has shown everyone will stay with us forever. A celebration of life will be held early summer.

Terri Lyn (Kline) Hammons was called home on March 14, 2021 at 4:11 p.m. She was born in Lafayette, IN on July 24,1954. She is a daughter to Marilyn Dalton and John Kline. Terri was an amazing big sister to John (Marian) Kline, Jana (Roger)... View Obituary & Service Information

The family of Terri L. Hammons created this Life Tributes page to make it easy to share your memories.

Send flowers to the Hammons family.