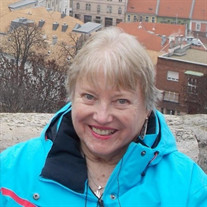 Terrance Lenane (Terry) Foley of Cheyenne died on September 6 after a lengthy illness. A true Army brat, Terry was born February 10, 1938 at Walter Reed Medical Center. She grew up around the world. She made the most of her opportunities, becoming fluent in several languages, especially Spanish. A precocious young lady, she danced with ambassadors and princes and thought nothing of it. After graduating from high school, she attended Manhattanville College. During her time there, she met Mr. Vincent Foley. After marrying Vince, she resumed her perambulations. She lived in places as diverse as Bethlehem PA, New York City, NY, Boston, MA, and Salt Lake City, UT. Her final move was to Cheyenne in 1979. Terry earned both a bachelor's and Master's degree in Anthropology from the University of Utah. She was a private pilot, a certified SCUBA diver, and a Distinguished Toastmaster. She led the Wyoming HIV/AIDS program through the controversial period of the 1990s. In 1995 Terry met her second husband, Michael Hand. They married in 2002. Terry transmitted the travel bug to him. Together they ventured to Mexico, Ireland, India, Germany, Panama, Alaska and various points throughout the United States. Terry was an outstanding hostess. Her dinner parties will be remembered fondly by those fortunate enough to receive an invitation. Special recognition goes to Dr. Loren Krowl and Amy Shaw at CRMC, Dr. Wright and the staff at Colorado Plains Medical Center in Fort Morgan, and Sundae and the staff at Cottonwood Creek-especially Reena and Rachel. These people put the word "care" in health care. A memorial of Terry's life will be Friday, September 17, 2021, 10:00 a.m., at Weiderspahn-Radomsky Chapel with a reception to immediately follow at The Gathering Place. Terry's remains will be spread in a family ceremony at a later date.

Terrance Lenane (Terry) Foley of Cheyenne died on September 6 after a lengthy illness. A true Army brat, Terry was born February 10, 1938 at Walter Reed Medical Center. She grew up around the world. She made the most of her opportunities, becoming... View Obituary & Service Information

The family of Terrance Lenane "Terry" Foley created this Life Tributes page to make it easy to share your memories.

Send flowers to the Foley family.