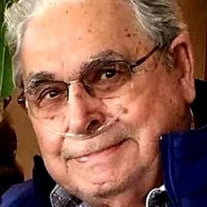 Ted Walton, our loving husband, father, grandfather, great and great great grandfather passed away peacefully on November 13, 2021 in Cheyenne after a courageous battle with cancer surrounded by loved ones and care givers, who will continue to honor his memory by living their lives to the fullest. Ted was born on the family homestead northeast of Bill, Wyoming (Pop 11) on September 29, 1929 to Lon and Rose Walton as the youngest of six siblings. After graduating from high school, he enlisted in the US Navy as an aviation mechanic and served on 13 aircraft carriers as part of carrier wing VF-3 during his career. He married Delina (Del) Carlos on July 21, 1951 in Rhode Island and during other stationings in the Navy, raised a loving family of Ted Jr., Sandra, David and Jay. After retirement as a US Navy Veteran the family relocated to Cheyenne Wyoming in 1967 where he resided till his death. The Navy gave Ted the skills of a teacher and craftsman, first with Cannon Aeronautical Center and then with a new start up company called Taco Johns in 1969 where he designed and built stainless steel steam tables and other creations till his retirement in 1997. During retirement, Ted and Del loved to travel around the southern US in their camper and spent many years “snow-birding” in Yuma, Az. till Del's death in 2005. Ted was a member of the Cheyenne Shrine Club Frontiersmen and was a 33rd degree Mason with the Scottish Rite. He had a lifelong love of fishing, hunting and camping with friends and family. He also was an avid black jack and cribbage player and was very competitive. After Del's passing, Doris and Ted found each other and were married in 2007. They traveled extensively throughout the US seeing many sights till health issues arose. They have great love for each other and shared many laughs and a few lively debates. Ted is survived by his loving wife Doris, son Ted Jr., daughter Sandra (Roy) Bechtholdt of Cheyenne and son Jay (Cindy) of Caldwell ID. and was blessed with numerous grandchildren, great grandchildren, and great great grandchildren. He was proceeded in death by his wife Del in 2005 and son David in 2020, his parents and his siblings. Daughter Sandra was a godsend to both Ted and Doris, tirelessly caring for both of them with the help of family members the last 5 years. A celebration of life will be held at later date, in lieu of flowers, memorial contributions may made in Ted's name to the Shriner's Children Hospital in Salt Lake City, The American Cancer Society, a Veterans Charity or a charity of your choice. The family would also like to thank the doctors and nurses of the VA Hospital in Cheyenne for their support, dedication and caring for our US Veterans and helping Ted and his family. Thank you for your service Ted.

Ted Walton, our loving husband, father, grandfather, great and great great grandfather passed away peacefully on November 13, 2021 in Cheyenne after a courageous battle with cancer surrounded by loved ones and care givers, who will continue... View Obituary & Service Information

The family of Ted Walton created this Life Tributes page to make it easy to share your memories.

Send flowers to the Walton family.