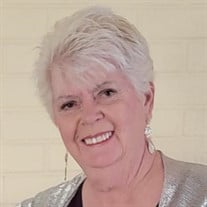 Sandra Marie Underwood, age 76, of Denver and Cheyenne, entered fully into the presence of her Lord and Savior on October 19, 2021, from complications of COVID. Sandi was born September 21, 1945, in Spokane, Washington, the third of three children born to William and Alexandra Haynes. She married Jerry Underwood on May 7, 1965, in Fremont CA, and gave birth to her only child, Robert Wayne in 1972. She is remembered for her ability to train and show horses and dogs from an early age. As a 4H member in Spokane she and her horse, Bandit, earned many awards including Reserve Quarter Horse of the Year in Washington State. Bandit and her dog, Joe, were her best friends during those years. In addition to Spokane, Denver and Cheyenne she has lived in Richland, WA, several communities in the San Francisco Bay area and Golden and Montrose, CO. She and Jerry owned and operated a pet store in Delta, Colorado, for several years and became known for their extensive knowledge of fish. Sandi was a naturally gifted artist. She began serious artistic endeavors when she was 50 years old. Her career began by doing inspirational pieces that often were accompanied by scriptural narratives and interpretations. In the past 5 years, Sandi developed a skill she often used in many of her paintings using colored pencils overlaid by oils - a unique method she created. This technique produced a colorful translucent quality to her work. In later years her paintings of animals, and Western and Christian themes have become well known especially in Colorado and Wyoming. She is preceded in death by William and Alexandra Haynes (parents), Melvin and Bess Underwood (in-laws). She is survived by Jerry Underwood (husband), Robert and Amy Underwood (son/daughter-in-law), Jim Underwood (grandchild), Brennan Underwood (grandchild), Elizabeth Underwood (grandchild), Cole and Cassy Bostron (grandchildren), Jacob and Destiny Underwood (grandchildren), Boe Bostron (great-grandchild), William "Skip'' and Brenda Haynes (brother/sister-in-law), Susan Schnetz (sister), Lynn Underwood (sister­ in-law), Alvin and Sue English {brother-in-law/sister-in-law), Joe and Diane Underwood {brother-in-law/sister-in-law), and several nieces and nephews. A memorial service will be held at 10:00 a.m. Thursday, November 4, at Wiederspahn Radomsky Funeral Home and will be live streamed at www.wrcfuneral.com beginning at 10:00 am.

Sandra Marie Underwood, age 76, of Denver and Cheyenne, entered fully into the presence of her Lord and Savior on October 19, 2021, from complications of COVID. Sandi was born September 21, 1945, in Spokane, Washington, the third of three children... View Obituary & Service Information

The family of Sandra Marie Underwood created this Life Tributes page to make it easy to share your memories.

Send flowers to the Underwood family.