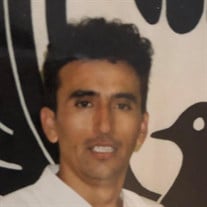 Salvador Macias Martinez was born December 10, 1960 in Zacatecas Mexico to Juanita Martinez and Salvador Macias and passed into eternal life on June 12, 2021. As a young boy Sal "Chavo" immigrated to the United States to be with his mother and siblings. Sal attended primary school in Denver Colorado and finished his education in Cheyenne, Wyoming where he met the love of his life, Lee Macias (Aldana). Their love began as teenagers which led to their wedding day on May 18th, 1984. Sal and Lee shared their love together for 40 years. They were blessed with three wonderful children and six grandchildren. Sal accomplished many things in his life. He lived life to the fullest and was devoted to many passions including his practice in traditional Japanese Karate. Sal practiced under his mentor, Sensei Sadaharu Kurobane of Wado Kai Martial Arts in Lakewood, Colorado. After earning his black belt he went on to fight in competitive tournaments where he placed and won championships. After 15 years of competing, Sal went on to teach Karate to youth and adults in Cheyenne. He took the values and life lessons he learned from karate to coach and teach his children various sports and activities. He was their number one motivator. Sal was master of all trades and his joys included; fishing, lifting weights, all types of music, drawing, and he could fix just about anything with his own hands. He loved his job at Goins Elementary where he was the Head Custodian. He cherished his relationships with the students, staff, and faculty. Sal had the biggest, loving, caring, and giving heart and always kept his door open for his kid's friends who needed somewhere to stay. He had the best sense of humor and his nieces and nephews can attest that he was the king of giving nicknames. His happiest times were spent with his wife, children, grandchildren, and "his boy Chaz". Above all, Sal had a great devotion to our Lord Jesus Christ, our Blessed Mother, and his given Saint, Saint Padre Pio. Survivors include his wife of over 41 years, Lee Macias, his children, Raquel (Dan) Clark, Erik Macias (Abbie) and Diana Macias (Evan); 6 grandchildren, Lucia and Nora Clark, Bentley Macias and Krystos Kelly, and Ava Narvais and baby Millie; his siblings Maria "Lupe" Valdez, Maria "Chuya" Leyva, Maria "Chayo" Vargas, Yolanda (Mike) Conwell, Armondo (Maria) Macias, Gloria Fernandez; and many nieces and nephews. Sal was preceded in death by his parents Salvador Macias and Juanita Martinez, brother Hugo Macias, brother-in-law Antonio Valdez Sr., nephew Antonio "Tony" Valdez, brother-in-law Wayne Fernandez, and our beloved Grandma Virginia Sanchez. Vigil for the Deceased will be Monday, 6:00 p.m., at Wiederspahn-Radomsky Chapel with Father Clark Lenz officiating. Funeral Liturgy will be Tuesday, 10:30 a.m., at St. Mary's Cathedral with Father Clark Lenz and Father August Koene as celebrants. Cremation has taken place.

Salvador Macias Martinez was born December 10, 1960 in Zacatecas Mexico to Juanita Martinez and Salvador Macias and passed into eternal life on June 12, 2021. As a young boy Sal "Chavo" immigrated to the United States to be with his mother... View Obituary & Service Information

The family of Salvador Macias Martinez created this Life Tributes page to make it easy to share your memories.

Send flowers to the Martinez family.