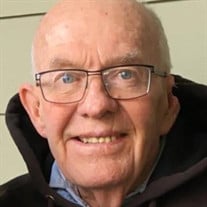 Ross Rosevelt Peery was born in Cheyenne, WY on 7 December 1934; he died in Cheyenne on December 28, 2021, one week after his sister Thelma Harrell and three weeks after his 87th birthday. These kinds of facts and statistics were the kind of information that Ross found to be important to understand the world. Ross started his working career when he was 11 years old by milking the neighbor’s cows. When he turned 16, he went to work at the Wyoming Trading Post grocery store. He graduated from Central High School in 1952 and went to work at the Union Pacific Railroad as a machinist’s apprentice. In 1956, he went to work for the Wyoming Air National Guard as a mechanic. In 1962, he trained as a flight engineer and continued to work for the Guard until March of 1993, when he retired with 15,797 total flying hours to his credit. While he was flying with the Guard, he visited all of the countries in central and south America, as well as going to Australia, New Zealand and American Samoa. His normal supply route to the Far East was to fly to San Francisco, then Honolulu, Wake Island, Guam, the Philippines, and then into Vietnam; often they continued to Okinawa in Japan. When he flew to Europe, he went to Italy, France, Germany, Denmark, Sweden and Norway, then to England and spend some time there. One trip of interest was to Libya to transport Gaddafi’s possessions when he was kicked out. The cargo was often supplies for the American Embassies in those countries; the strangest cargo they flew was a giant tank of helium to Argentina for a man who was going to attempt a hot air balloon flight around the world. Following retirement, Ross and Alice continued traveling in their various motor homes, eventually becoming snow birds and living part of the year in Yuma, Arizona. In 2013, they returned to Cheyenne full time and spent the last several years living at Whispering Chase Senior Apartments. Ross had many hobbies, most of which were related to either travel (especially air travel) or reading science fiction, both of which were lifetime favorite activities. As a young adult, he became a member of the Cheyenne JayCees and participated in a number of civic events. He was a member of Good Sam’s Club and High Plains Drifters and had served those organizations in several ways; he served as crew for the Cheyenne Hot Air Balloon Club; he and Alice travelled with the Friendship Force and welcomed many people from foreign countries into their home. They were also members of the Cheyenne Camera Club, where he would often share slides of his trips to various places around the world—as well as their travels in the states. He and Alice were members of First United Methodist Church and raised their children in the church, serving as youth group leaders when their children were a part of that organization. When they were traveling, church was always a part of the weekly schedule, but they always returned to First UMC when they returned to Cheyenne. In February 1955, Ross married Margo Price. Out of this union was born daughter Jamie on May 8, 1956 and son Roger, born on December 10, 1957. Ross and Margo divorced in May of 1959; with Ross having custody through college. On November 18, 1961, Ross married Alice Berkley and she became an instant mother of a 5 year old and a 3 year old. Out of this union, son Alan was born on October 4th of 1964; two years later they added daughter Janelle, born on November 28, 1966. Ross was preceded in death by his parents, Charles Leroy Peery and Sarah Lavinia (Ross) Peery, brothers Clark and Earl David Peery, sisters Mary Lou (Peery) English and Thelma Jean (Peery) Harrell. He is survived by daughter Jamie Norwich McLennan, now of Cheyenne; Roger (Sharon) Peery of Tacoma Washington; Alan (Brenda) Peery of Taplow, England; and Janelle (Peter) Durham of Kirkland Washington. He is also survived by many grandchildren, great-grandchildren, nieces, nephews and friends. A Celebration of Life Memorial Service will be held at 10:00 am on Friday, December 31, 2021 at Wiederspahn-Radomsky Chapel and at www.wrcfuneral.com, Rev. Mark Marston presiding. In lieu of flowers, the family has requested any memorials be made to First United Methodist Church of Cheyenne.

Ross Rosevelt Peery was born in Cheyenne, WY on 7 December 1934; he died in Cheyenne on December 28, 2021, one week after his sister Thelma Harrell and three weeks after his 87th birthday. These kinds of facts and statistics were the kind of... View Obituary & Service Information

The family of Ross Rosevelt Peery created this Life Tributes page to make it easy to share your memories.

Send flowers to the Peery family.