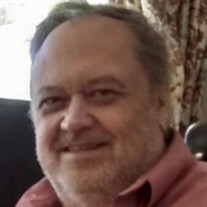 Ross Mark Bagne passed away on June 4, 2021, just after midnight, at the age of 68, in the presence of family and friends, at Regional Medical Center in Cheyenne, Wyoming. He lost his battle with the covid-19 virus and several comorbidities and struggled for two weeks in the hospital. But in his final hours he slept and died peacefully in the very place where he was born on December 27, 1952 when it was known as Memorial Hospital. He was the third of four children born to Theresa and Delton E. Bagne who came in 1947 to Cheyenne from North Dakota. He was influenced by the faith of his mother who rewarded her children with ice cream after attending services at St. Paul’s Lutheran church. On returning from college, he taught Sunday school there. Religion and his study of the Bible were an essential part of his life. He was fascinated by the Danish philosopher Soren Kierkegaard, who he called "SK," and he studied his writings for years. In 2006 he began writing a 458 page treatise, Knight of Infinite Resignation on SK’s conception of Christianity, published in 2009. He wrote a second book, Christian Existentialism, a primer on SK’s theology, published in 2020. Ross attended George Washington University in Washington D.C. from 1971 to 1975, earning a Bachelor’s degree in Political Science. He returned to Cheyenne and soon after, created The Cheyenne Postal Center which he operated for many years. He later sold the business and became a Registered Agent for the Wyoming Secretary of State to create and service Limited Liability Corporations through a new venture, Wyoming Corporation Service Inc. He served clients mostly from other states and other countries. Eyeing retirement in 2019, he started to wind down the business, but was still at work until he contracted covid and entered the hospital. Ross is survived by his sister Karen McKnight of Sammamish, Washington, his brothers Paul Bagne of Auburn, California and Mark Bagne of Cody, Wyoming, his niece Stephanie McKnight of Seattle and his nephews Chad Mcknight of Tacoma, Washington and Simon Bagne of Cody.

Ross Mark Bagne passed away on June 4, 2021, just after midnight, at the age of 68, in the presence of family and friends, at Regional Medical Center in Cheyenne, Wyoming. He lost his battle with the covid-19 virus and several comorbidities... View Obituary & Service Information

The family of Ross Mark Bagne created this Life Tributes page to make it easy to share your memories.

Send flowers to the Bagne family.