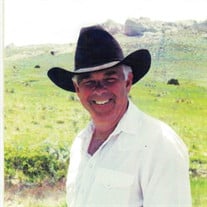 Ronald M. Lovercheck, 74 of LaGrange, WY, passed at Davis Hospice Center on May 28, 2021. He was born October 5, 1947 in Casper WY to Dean and Donna Lovercheck. Ron grew up on the family CP Ranch near LaGrange, WY. After High School, Ron attended Western College of Auctioneering. He auctioned at the local sale barn in Torrington and throughout the rest of his life auctioning banquets, fundraisers and estate auctions. He earned a certification from Automation and Training Universal for computer system operations, which led him to a position with Omaha National Bank. He became a certified volunteer EMT for the Lagrange Search and Rescue. In the late 70’s, Ron and his wife Sherri began a new adventure in Pinedale, WY. They purchased a western clothing store named The Buckskin Trading Co. During the years in Pinedale, Ron was the President of the Chamber of Commerce and a member of the White Pine Ski Patrol. He was an outdoor enthusiast and enjoyed hunting and fishing. He often helped with guided hunting trips in the Wind River Mountains. Upon returning to southeast WY, he became a realtor/broker. He built Silver Wing Hunting Ranch, a pheasant and game bird hunting business. He was appointed to the Wyoming Game and Fish Commission by Governor Freudenthal in 2003 and served until 2009. During his tenure he served as President. Ron was a member of Highlands Presbyterian Church. While Ron had several careers, his passion was ranching on the family ranch. His lifelong love of ranching led to improvements in the ranch infrastructure and to the habitat environment for both cattle and wildlife. He planted thousands of trees, restored the ditch banks and took pride in passing the ranch on to the next generation. Ron loved to travel and experience other cultures. He had visited 21 countries as well as nearly every state in the United States. His openness to other beliefs and ways of life poured out to everyone around him. He was very accepting, encouraging and a great mentor for his children and grandchildren. Ron is survived by his wife of 53 years, Sharon Olson Lovercheck, his children Raedene Messenger (Kirk), Justin Lovercheck, his grandchildren, Dakota Haller, Lanie Messenger, Savannah Messenger, Chase Hunnel, Chase Lovercheck, Kelci Lovercheck, Casey Messenger (Ashley), Dallas Jackson; 7 great grandchildren, Mark Haller, Maggie Haller, Memphis Haller, Liliana Messenger, Cash Messenger, Mason Jackson, Spencer Jackson; and brother, Otis (LaNita) Lovercheck. Ron is preceded in death by his grandparents Charles and Norma Lovercheck, his parents Dean and Donna Lovercheck, brother in-law Rodney Olson, brother in-law Dewey Olson, son-inlaw Mark Messenger and grandson in-law Tony Haller. Memorial service will be held on June 12, 2021, 2:00 p.m. at the CP Ranch, 1086 US Highway 85, Lagrange, WY Memorial Donations may be directed to LaGrange Ambulance Service C/O Town of Lagrange, P.O. Box 185 LaGrange, WY 82221 or Wind River Indian Reservation Student Emergency Fund C/O Highlands Presbyterian Church, 2390 Pattison Ave. Cheyenne, WY 82009

Ronald M. Lovercheck, 74 of LaGrange, WY, passed at Davis Hospice Center on May 28, 2021. He was born October 5, 1947 in Casper WY to Dean and Donna Lovercheck. Ron grew up on the family CP Ranch near LaGrange, WY. After High School, Ron attended... View Obituary & Service Information

The family of Ronald M. Lovercheck created this Life Tributes page to make it easy to share your memories.

Send flowers to the Lovercheck family.