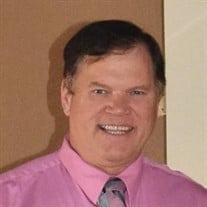 Ronald Paul “Butch” Johnson, Jr., 64, of Cheyenne, died on July 19, 2021 in Cheyenne Wyoming. He was born on January 7, 1957 in Minneapolis, Minnesota to Ronald and Mary (nee Lasher) Johnson. He was the second oldest of four children. He grew up around Wisconsin and settled in Hixton, where he attended Black River Falls high school in Black River Falls, Wisconsin. After high school, He attended the University of Wisconsin- Stevens Point. He then transferred to Trinity Bible Institute in Ellendale, North Dakota to pursue ministry. He graduated with a Bachelor of Arts degree and was a proud ordained minister. While attending college at Trinity Bible Institute Ron married Christy Woodard and they had a daughter Charity. After college, Ron moved his young family to Washington state, then on to North Dakota, while there he worked for Dowell. His first son Justin was born while in Williston. He then bought a floor maintenance franchise with Western Maintenance company and moved his family to Jacksonville, Florida. He was active in the church, He and his wife Christy were fulltime youth and children’s ministers at the Mandarin Assembly of God. In 1992, he sold his business to his brother Kevin to move back north. Ron’s desire was to be a pastor of a church and be more involved with ministries. They spent a short time in Black River Falls, Wisconsin and then moved to Christy’s home state of Montana, where he became the pastor of the Roundup First Assembly of God church. Later in life he moved to Wyoming to work on the oil rigs with his son, where he settled in Cheyenne. He met and married Jez Fortich, They had two sons and one daughter, Caleb, Christian and Cezarhya, He was very involved with missions at Miracle Valley church and was self-employed as a contractor. Ron was a proud Norwegian, who saw himself as the next Grizzly Adams with a great sense of adventure. He loved basketball, hunting, fishing, camping, ranch life and all things outdoors. He discovered basketball as a teen and went on to be an amazing player, and received the nickname Jabbar. He was very athletic and a scrappy player who was known for his reverse layup. Ron was a forward for the Crusaders at Trinity and was one of the starting five. They were like a dream team and won the Midwest championship of the NCCAA. Ron also was recognized for scoring over 1,000 points one season. Ron was so proud of his children and grandchildren hoping they would grow as tall as him and play sports. He also coached basketball wanting to instill the love of the game to others. Ron was a jokester and loved to make people smile. Ron was a humble and sometimes quiet man. He more than anything loved Jesus and would share the gospel to anyone he met. He loved to bake and thought he was the best cook, after his mother of course. Ron was also a very giving man and would help anyone that needed it without any compensation or recognition. As a child of 3 he would help his neighbors and that would continue his entire life. Ron was a hard worker that never quit, strong willed and thought he could do anything. He could fix anything. Ron is survived by his wife Jez and their 3 children Caleb, Cezarhya and Christian. His former wife Christy Woodard and their children Charity (Gary)Ross and Justin (Karen)Johnson grandchildren Austin, Lacy, Serah, Vivien and Judah. His mother Mary Johnson, Brother Kevin Johnson, sister Diane (Ray) Heller, brother in law David Johnson, nephews Craig and Aaron Johnson, and Zach Ring. His father and mother in law Nestor and Porferia Fortich, brothers in law Jeffrey and Jexter Fortich and sister in law jenefer fortich, also many in laws and nieces and nephews from the Woodard family Along with many aunts, uncles and cousins and many friends from all walks of life. Ron is preceded in death by his father Ronald Paul Johnson sr, His sister Cheryl Johnson and his niece Aysha Ring. Ron loved and served the Lord all his life. To him the most important thing in life was salvation and having a personal relationship with Jesus. He taught his Children to love the Lord, and would tell the gospel to any who would hear. He loved his family more than anything and is waiting to see us in heaven. Honorary pallbearers will be Justin Johnson, Kevin Johnson, Caleb Johnson, Christian Johnson, Craig Johnson, Aaron Johnson, Zach Ring, Ray Heller, Chris Cain, John Woodard, David Johnson, Austin Wagner, Gary Ross, Duane Weinmeister, Dan Adrich, Dow Warner, Keith Wagler, Nestor Fortich, Jeffrey Fortich, and Jexter Fortich. The services can be viewed on the Miracle Valley Church website at http://miraclevalleyministries.org/

The family of Ronald Paul "Butch" Johnson, Jr. created this Life Tributes page to make it easy to share your memories.