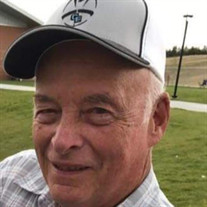 Ronald Wade Blunn passed with peace and strength on September 9th at Cheyenne Regional Medical Center, surrounded by his family. Ron was born February 17th, 1940 in Denver, Colorado. He was preceded in death by his parents Montie and Beryl Blunn, his brothers Jim and Richard, and an infant daughter, Katherine Elizabeth. Ron grew up on Golden Valley Ranch outside of Golden, Colorado. He was the youngest of three brothers. Ron was a true cowboy. He spent his youth and early adulthood ranching on his family’s beautiful, sprawling property with a view of today’s Blunn Reservoir and the Rocky Mountains. His childhood instilled in him an abiding love for nature and the lifestyle of the hard-working. Legend holds that, as a teenager, Ron rode his horse Fleeta over “The Belly of the Sleeping Indian” in the mountains west of Arvada, a trek that even the most experienced hiker avoids. Ron became an electrician at Western Electric before relocating to rural South Dakota, where he continued his ranching lifestyle for 15 years. In 1989, Ron moved to Cheyenne, Wyoming with his wife Beverly. Ron became heavily involved in youth sports. He served as President of the Cheyenne Junior League baseball organization, and he also served on the board for Senior Babe Ruth. Ron was instrumental in developing and implementing Cheyenne’s first youth traveling baseball program in 1995. Ron loved coaching his sons and grandkids in many youth sports. He was his grandkids biggest fan and could always be found watching them play basketball, baseball, football, track, dance, and even swimming. Ron loved the outdoors, especially camping in the Snowy Mountains of Wyoming. He and Bev went on camping trips every year. Ron enjoyed traveling, and even made a 3,000 mile road trip within the last year, achieving a lifelong dream of seeing a Civil War battlefield in Chattanooga. Ron loved history, shooting guns, spotting wildlife, and Cowgirl basketball games. He also loved his many dogs over the years, especially his schnauzers. Ron was the strong and silent type and had a gentle heart. He was full of wisdom and humor. More than anything Ron loved his family, and he leaves behind many who will miss him and remember him every day. He is survived by his wife of 48 years, Beverly Blunn, four sons Don Blunn (Becky) of Broomfield, Colorado, Michael Blunn (Stacy) of Thornton, Colorado, Wade Blunn (Amy) of Cheyenne, Jesse Blunn (Katie) of Cheyenne, along with 15 grandchildren and 3 great grandchildren. The family will be spreading Ron’s ashes at a later date in the Snowy Mountains he so loved. A public funeral service will be held 2:00 PM Saturday, September 25th at Wiederspahn Radomsky with a reception following in the basement of the Sanford Restaurant, 115 E. 17th St. in Cheyenne. Family and friends are welcome to join. The service will be live streamed beginning at 2:00 pm Mountain Time at www.wrcfuneral.com. For memorial contributions, the family has designated Cheyenne East Thunderbird Athletics, 2800 East Pershing Cheyenne, Wyoming 82001.

Ronald Wade Blunn passed with peace and strength on September 9th at Cheyenne Regional Medical Center, surrounded by his family. Ron was born February 17th, 1940 in Denver, Colorado. He was preceded in death by his parents Montie and Beryl Blunn,... View Obituary & Service Information

The family of Ronald Wade Blunn created this Life Tributes page to make it easy to share your memories.

Ronald Wade Blunn passed with peace and strength on September...

Send flowers to the Blunn family.