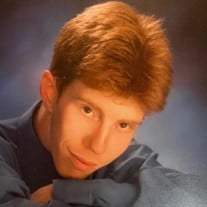 Rodney Mace came into the world too early and left too early. He was born January 28, 1984, in Sheridan, Wy. and passed away suddenly in Cheyenne on August 23, 2021. Rodney grew up in Sheridan, where he was an avid fisherman and outdoor enthusiast. He was active with Special Olympics during his childhood, participating in skiing, bowling, and track. He had a great support system in Sheridan that encouraged his hobbies. Rodney moved to Cheyenne when he was a teenager and quickly and easily began to develop friendships in his new community. His joy for life was what drew people to him and made them want to spend time with him. Rodney’s first goal when moving to Cheyenne was to be able to live an independent life. Because of his family, friends, and support system, he was able to have his own apartment, which was important to him. Rodney loved to travel. He said his favorite place to visit was Jamaica, as he felt the Jamaican people treated him like anyone without a disability. His love for Jamaica continued throughout his life. He was recognized around town for his love of all things Jamaican, including his fashion. If he wasn’t wearing the Jamaican flag or an image of Bob Marley, then he was in tie-dye, a peace sign or something from the 70s. Another of Rodney’s interests was Elvis, and he was lucky enough to have visited Graceland, which he spoke about fondly. Rodney was known as a collector of Coca Cola and other collectible items, and he enjoyed trying to find hidden gems in antique and thrift stores. If Antique Pickers ever needed another person on their show, he would have jumped at the chance to join them. Most of the time when he was hunting for the best items, he was thinking of someone else and always found the right treasures to give to his family and friends. Employed at the Cheyenne Animal Shelter for 16 years, Rodney was the longest termed employee there. His dedication to his job was always inspiring to those around him. He didn’t ever want to call in sick to work and was never a person to do so just because he needed a day off. He was proud to have this job as a person with a disability, and that was something that he and his family shared. Music and dancing were his passions, and he loved all the live music opportunities in the community. He especially enjoyed hanging out with his friends at Fridays on the Plaza. He made so many friends there and enjoyed every band he heard. Seeing his community grow and having these types of opportunities was always exciting to Rodney. A celebration of Rodney’s life will be held at the Lions Park Gazebo, on September 18, from 1 until 4 pm. Rodney would want a party and dancing, and his family is encouraging people to wear their favorite tie-dyed shirts, 70s outfits, rock band t-shirts or Rasta-themed apparel to the celebration. The Rodney Mace Memorial Fund has been established through Go Fund Me https://gofund.me/de5cdbc3. Any contributions made in his name will be donated to places that were near and dear to him, such as the Animal Shelter, Rooted in Cheyenne, Fridays on the Plaza, and others.   One could never list all the names of people whose lives were touched by Rodney. He is survived by his parents, Dixie and Rich Gannon; his brother, Jared Mace and partner Sarah Sharif; his brother, Aaron Mace; his grandmother, Nancy Werner; and numerous aunts, uncles and cousins and Jerry Mace. Rodney’s brother, Aaron, said that Rodney possessed an admirable strength in forgiveness. A family friend characterized Rodney as a groovy technicolor light in a neutral-colored world, and we believe that is exactly how he would like to be remembered.

Rodney Mace came into the world too early and left too early. He was born January 28, 1984, in Sheridan, Wy. and passed away suddenly in Cheyenne on August 23, 2021. Rodney grew up in Sheridan, where he was an avid fisherman and outdoor enthusiast.... View Obituary & Service Information

The family of Rodney Ross Mace created this Life Tributes page to make it easy to share your memories.

Rodney Mace came into the world too early and left too early....

Send flowers to the Mace family.