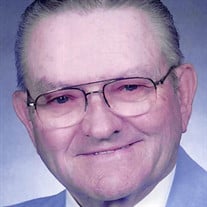 Robert B. Sullivan, 90, of Cheyenne passed away May 22, 2020 at his home with his family by his side. Robert was born March 23, 1930 in Fort Collins, CO, to Finis and Wylena Sullivan. He was raised in Risk Canyon located west of Fort Collins and attended Cache La Poudre High School, graduating in 1948. After graduation, Robert attended Colorado State University until he entered the United States Army September 15, 1949. Robert was stationed in Korea during his military service and was honorably discharged October 6, 1952. After being discharged Robert relocated to Cheyenne, WY and began working for Tyrrell Chevrolet. It was during his time in the military that Robert met Marjorie Wichman whom he later married on November 5, 1955. At the time of his passing, he and Marge had celebrated almost 65 blessed years together. Shortly after their marriage, Robert began work at Warren Airforce Base and retired as Chief Inspector May 1, 1985 after 30 years of service. Robert was well known by his friends and family for his wonderful smile and sense of humor. Robert had a tremendous love of animals, particularly dogs and horses. Robert loved to hunt and fish and was able to pass on his love of the outdoors to his children and grandchildren. Robert was very community minded and served as a Cheyenne Frontier Days Chuck Wagon Judge for several years. Robert was also a member of the First Presbyterian Church, Masonic Lodge, Scottish Rite, and Shriners where he served as a Shrine Clown for a number of years as well. Robert was also a member of the Order of Eastern Star, the American Legion Post 6 and a life member of the Veterans of Foreign Wars Post 4343. Robert is survived by his wife, Marge; sons, George (Deebs) Sullivan and Jay (Cyndi) Sullivan; grandchildren, Amber Sullivan, Zachary, Lauren, and Brooklynn Sullivan; brothers, Bill (Ginger) Sullivan, Jack (Marie) Sullivan; sisters, Shirley (Edward) Matson, Betty (Johnny) Graham; several nieces and nephews. Robert was preceded in death by his parents and sister Charlotte (Howard) Jones. Cremation has taken place. A memorial service will be held at 2:00 pm on October 17, 2020 at Wiederspahn-Radomsky Chapel of the Chimes - 1900 E 19th St, Cheyenne, Wyoming 82001. Memorials may be made to the Shriners Hospitals for Children.

Robert B. Sullivan, 90, of Cheyenne passed away May 22, 2020 at his home with his family by his side. Robert was born March 23, 1930 in Fort Collins, CO, to Finis and Wylena Sullivan. He was raised in Risk Canyon located west of Fort Collins... View Obituary & Service Information

The family of Robert B. Sullivan created this Life Tributes page to make it easy to share your memories.