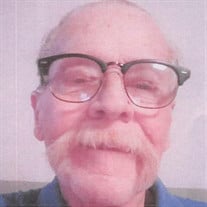 Robert D. Hutchins, 82, of Cheyenne, passed away on December 3, 2021, at Sierra Hills Assisted Living. Robert was born on January 23, 1939, in South Bend, Indiana to Dale H. and Vera Eileen (Smith) Hutchins. He graduated high school at Bell Gardens, California in 1957. Joined the Air Force February on 1958 and retired March of 1979. He married Elain Sharp July 4, 1960 and they had two sons. His life changed courses in 1970 and two years later he met and married Josie L. Lavato. She had six children and Robert and she joined their families. His hobbies are fishing, gold prospecting, and hunting, but his most important one was his family. Robert is survived by his sons, Robin (Priscilla), Bruce (Cyndee); stepchildren, Jimmy, Anna, Timmy, and Amy; sister, Maria Hillbers, of Sun City, California; brother, Tommy R. Hutchins, of Monroe, Washington. He was preceded in death by his parents; wife, Josie; brother, John E. Hutchins; daughters, Elizabeth, and Sandra. Cremation has taken place under the care of Wiederspahn-Radomsky Chapel. Interment of his cremains will be in the Cheyenne National Cemetery.

The family of Robert Dale Hutchins created this Life Tributes page to make it easy to share your memories.

Robert D. Hutchins, 82, of Cheyenne, passed away on December...

Send flowers to the Hutchins family.