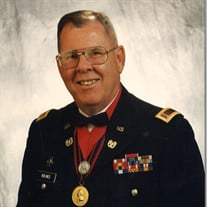 Not sure what to send?

Robert (Bob) Holmes, age 90, of Cheyenne passed away on May 12, 2022, after getting a haircut. He was born on July 16, 1931, in Cheyenne to Otis and Marie Holmes. Bob met his wife Beverly Nair in debate class at Cheyenne High. They were married for over 70 years. A beehive began in 1953 with the birth of Bill followed by Barb in 1954, Betty in 1955, Bonnie in 1956 and Brad in 1957. This created the “7 B’s.” Bob enlisted in the Wyoming Army National Guard in 1949. A highlight of his career was helping to establish an Army National Guard unit in the Virgin Islands in 1973. While on active tour duty in Washington D.C., Bob designed the new National Guard recruiter badge. He finished his career by becoming the first Master Warrant Officer in the United States. After 42 years of service, he retired in 1991. Bob’s first big game hunt was in 1952 when he bagged in first buck deer. His hunting career spanned 70 years and included antelope, deer, elk, moose and bear. His favorite early hunting partner was father-in-law Chuck Nair. Bob was also an avid fisherman. Bowling and golf were two of his favorite past times, made more challenging because he was left-handed. His volunteer efforts included Meals on Wheels, Wyoming Militia Historical Society and the Wyoming National Guard Museum. He was preceded in death by his parents, younger brother Ed and in-laws Chuck and Agnes Nair. He is survived by his wife Bev; five children, William (spouse Mark) of Tucson, Barb (Dan) Puett of Cheyenne, Betty Holmes of Laramie, Bonnie (Terry) McClure of Kersey, CO and Brad (Julie) of Arlington, WY; three grandsons, Matt Puett (Cheyenne), Jake Holmes (Denver), Kyle Puett (Las Cruces, New Mexico); and one great grandson, Archer Holmes. Services will be Friday, May 20 at 2:00 PM at Wiederspahn Radomsky. A memorial fund in Bob’s honor will be established with the Wyoming National Guard Museum at 624 E. Pershing, Cheyenne, Wyoming, 82001.

Robert (Bob) Holmes, age 90, of Cheyenne passed away on May 12, 2022, after getting a haircut. He was born on July 16, 1931, in Cheyenne to Otis and Marie Holmes. Bob met his wife Beverly Nair in debate class at Cheyenne High. They were married... View Obituary & Service Information

The family of Robert Otis Holmes created this Life Tributes page to make it easy to share your memories.