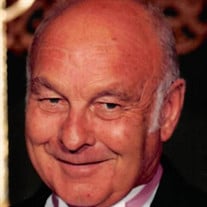 Robert Hugh Henderson, 93, passed away on Tuesday, August 31, at his home in Cheyenne Wyoming. He was born July 21, 1928, in Edgemont, SD to Andrew M. and Agnes Galbraith Henderson. He grew up on the Henderson ranch, outside of Edgemont, SD with his dad and 6 siblings. His mom died in childbirth when he was only 2 years old. Robert attended grade school through his freshman year in Edgemont. From there he went to St. Agnes academy in Alliance NE through 12th grade. Robert met Patricia May Powers through a mutual friend in Hot Springs SD. He married her on November 11, 1949. This November they would have celebrated 72 years of life together. Robert, or Bob, as most people called him, was a very hard worker who took great care of and supported Pat and their 5 children. He worked many jobs over his lifetime these included: ranching, working on an oil rig, working as a coal miner, and at his favorite job of driving semi-trucks. He worked for over 20 years for Consolidated Freightways in Broomfield, CO and Cheyenne, WY. He was forced to retire for health reasons. Bob is survived by his wife Patricia and his five children; Karen Patterson, Roberta Henderson, Peggy Henderson, Fred Henderson, and Scott (Cyndi) Henderson; his grandchildren, Josh (Tiffany) Patterson, Kim Patterson, Kyle and Shawn Schumacher, Jared (Becky) Briggs, Amy (Pete) Kirkwood, Brandon Briggs, David Holzrichter, Sean Holtzrichter, Allison (Shawn) Westbay, Tristine Henderson, Jack and Logan Henderson; his great grandchildren; Jaxon and Mason Patterson, Eathan and Audrey Holzrichter, Susan, Charlie and Georgina Westbay, Kaylynn and Cameron Kirkwood, Jacob and Easton Briggs. He is also survived by his sister Mary Girard and two half-sisters, Susan and Sharon Henderson. Bob was preceded in death by his parents, his brothers, Murray, Howard, Walter, and his sisters Maxine Hubbard, and Gertrude Crosby. He is to be cremated and there will be a private family gathering at a later date.

Robert Hugh Henderson, 93, passed away on Tuesday, August 31, at his home in Cheyenne Wyoming. He was born July 21, 1928, in Edgemont, SD to Andrew M. and Agnes Galbraith Henderson. He grew up on the Henderson ranch, outside of Edgemont, SD... View Obituary & Service Information

The family of Robert H Henderson created this Life Tributes page to make it easy to share your memories.

Send flowers to the Henderson family.