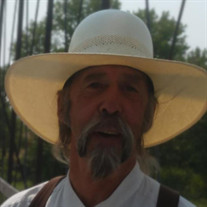 Robert (Bob) Haverkamp, 66, of Cheyenne, WY passed away peacefully on October 24, 2021. He was born to Albert and Levine (Thiele) Haverkamp in Remsen, IA on March 9, 1955. Robert was a 1973 graduate of St. Mary’s High School. He was a Navy veteran and earned a degree in Wireless Technology from Western Iowa Tech. He was united in marriage to Patty Dewey on April 2, 1983 and together had two sons Corey Haverkamp of Buffalo, MN and Cody Haverkamp of Cheyenne, WY. Though his marriage he was blessed with two stepsons Jerry Blackbird of Minneapolis, MN and Lloyd Blackbird of Riverton, WY and a step daughter Meghan Reilly of Texas. Bob had many interesting occupations throughout his full life including being a technician for Union Wireless. He retired in 2019. What he enjoyed most was being in the great outdoors. He loved camping, fishing, kayaking, building projects, horseback riding and especially old west competition shooting. He was a member of SASS and met many dear friends through this association. Being a “Frontiersman” was a way of life for Bob and he will be remembered by many in that way. He was preceded in death by his wife Patty, his parents, sister Theresa (in infancy), nephew Corey, and sister-in-laws Donna Haverkamp and Lind Haverkamp. Left to cherish his memory are his sons Corey and Cody Haverkamp; stepsons Jerry and Lloyd Blackbird; granddaughter Pearl; beloved friend Kris Schiffmann; siblings Jude Haverkamp, Ann (Dave) Ruden, Jean (Al) Erichson, Paul Haverkamp; along with numerous nieces and nephews, and his horse Buggs. A celebration of life will be held on Saturday, November 13, 2021 from 2:00 – 6:00 pm. Dinner will be served at 4:00 pm.

The family of Robert B. Haverkamp created this Life Tributes page to make it easy to share your memories.

Send flowers to the Haverkamp family.