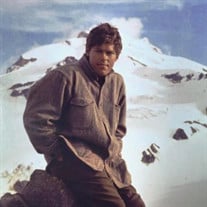 Robert “Bob” Fontaine (“Kingston” to his sisters, “Cool Bob” to his beloved children, friends, family, and dogs), 74, passed away on May 12, 2021 at the Cheyenne VA Medical Center from the effects of dementia. He was born on September 9, 1946 in Castricum, Netherlands to Herman and Hermina Fontyn. He was the second eldest and only boy in a family of six children, and much adored by his five sisters, who nicknamed him “Kingston.” The Fontyns immigrated to the United States from Holland in 1954, settling eventually in Grand Rapids, Michigan. Bob worked many odd jobs to help keep the family afloat (including something called a “muck farm”) and enlisted in the Army during the Vietnam War, serving two tours in 1970-71 on a base near the Cambodian border. After his discharge, he moved to Wyoming where he became enamored with mountaineering, taking courses at NOLS and leading expeditions in the Wind Rivers. He settled in Cheyenne, where he met and married his wife Beverly, and where they raised their three daughters. He became a carpenter, taking on ever more ambitious projects as the years went on. He loved to design and build houses from blueprint to finishing touches, sometimes almost entirely by himself, including his beautiful and beloved family home. He had many passions in addition to the mountains and his work: being a father and grandfather, dogs, reading, his faith, and musical performance. His first malamute, Sarge, was a beloved companion, and Bob treasured that his reunion with Sarge was the subject of a Paul Harvey story. He loved music and played guitar in church, Little Theater musicals, and numerous bands over the years, and found enormous joy in composing and sharing his pieces with the Cheyenne Guitar Society. He was a perfectionist in everything he did, demanded much from others, and never let anyone win at a board game (losers were subjected to a “victory dance” when he inevitably won). Above all, he was outspoken when he saw injustice and was unfailingly generous to those in need. He had many great ambitions: to play outfield for the Detroit Tigers, to be a rock star, and to become a world-famous author. He woke up early every morning before heading off to his construction jobs to work on his fantastical children’s stories, poems, and song lyrics. He went back to college to finish his degree in English at the University of Wyoming in the mid-1990s during the construction lull, thinking he might become an English teacher, but decided that the classroom wasn’t for him. But he stuck with his writing. He was tragically diagnosed with dementia as he was racing his eldest daughter to publish their first books and was never able to share his beautiful stories with the world. As a result of this disease, Bob spent the final year of his life living in the Community Living Center in the Cheyenne VA Hospital and his family would like to express their gratitude to the staff there who took such great care of him. Bob is survived by his wife Beverly; daughters Darcie (Aaron Walker), Abby (Steve) Jaye, Robin (Doug) Kus; granddaughter Henley Kus; five sisters, Jeanette Baker, Micki Paher, Kris Luyk, Muff Fransen, Joyce Rowe. He was preceded in death by his parents. A memorial service will be held at CrossPoint Fellowship Church, (First Congregational Church) on May 27 at 2 pm. In lieu of flowers, donations can be made to the Cheyenne VA Hospital Community Living Center, the Cheyenne Guitar Society Foundation, the National Outdoor Leadership School, or the Cheyenne Animal Shelter.

The family of Robert J Fontaine created this Life Tributes page to make it easy to share your memories.

Send flowers to the Fontaine family.