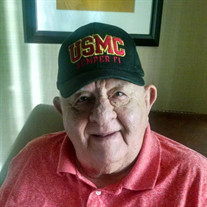 Robert (Bob) Bernhardt, 86, of Cheyenne went to be with his Lord and Savior on October 17, 2021. He was born on August 6, 1935, to Reinhold (Reiny) and Evelyn (Eva) (Bechtoldt) Bernhardt in Loveland, CO. He graduated from Windsor High School in 1953. He enlisted in the United States Marine Corps and proudly served during the Korean War for 3 years. He married the love of his life, Sandra Hester on August 27, 1960, and had 3 children. He graduated from Colorado State College, now (UNC) and went on to receive his master’s degree from Lesley College. Bob taught in LCSD #1 at Lebhart/Fairview for 35 years, mostly in the 6th grade. He enjoyed coaching all the elementary sports as well as working at the Cheyenne Youth Program in the summers. He was a beloved teacher, earning Teacher of the Year in 1986. Bob loved to travel with his wife Sandy, sister-in-law Shirley, and brother-in-law Tom. Bob and Sandy were active in the polka club for many years and made lifelong friends. They were fortunate to travel with them to many polka festivals, including Germany and Hawaii. Bob and Sandy were charter members of Highlands Presbyterian Church. They later became members of First Presbyterian Church and enjoyed being involved in their Mariners group. Bob is survived by his wife, Sandra (Hester) Bernhardt, son Brian (Shelley) Bernhardt, daughter Jill (Bernhardt) Prince (Chris), grandchildren Taylor Prince, Trenton Prince, Trinity Prince, sister Bonnie (Bernhardt) Steinbrecher, (Artie), brother-in-law Kent McDonald, brother-in-law Tom Maine, and several beloved nieces and nephews. Bob was preceded in death by his parents, son Brad Bernhardt, sisters Florine (Bernhardt) Lesser and Patricia (Bernhardt) McDonald, brother-in-law Richard Lesser, and sister-in-law Shirley (Hester) Maine. A celebration of Bob’s life will be held on Saturday, October 23 at 10:00 a.m. at Wiederspahn Radomsky Chapel of the Chimes with Rev. Bob Thomson officiating. Cremation has taken place. Donations in Bob’s memory may be made to First Presbyterian Church Mariner’s Friendship Group.

Robert (Bob) Bernhardt, 86, of Cheyenne went to be with his Lord and Savior on October 17, 2021. He was born on August 6, 1935, to Reinhold (Reiny) and Evelyn (Eva) (Bechtoldt) Bernhardt in Loveland, CO. He graduated from Windsor High School... View Obituary & Service Information

The family of Robert L. Bernhardt created this Life Tributes page to make it easy to share your memories.

Robert (Bob) Bernhardt, 86, of Cheyenne went to be with his Lord...

Send flowers to the Bernhardt family.