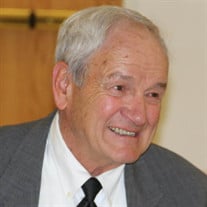 Richard Vosler, lifelong resident of Cheyenne, died peacefully at home Monday evening, March 1, 2021, with his family by his side. Richard was born in Cheyenne, WY on May 7, 1938. He attended and graduated from Cheyenne High and then served honorably in the U.S. Navy as an electrician onboard the USS Berry. He attended electrical school in Chicago after an honorable discharge from his military service in 1961. During his schooling he met Leslie Forman, they were engaged and married within a year. Richard’s Dad and brothers helped him build a home for a wedding gift. He lived in the home the remainder of his life. Richard then had a long and fulfilling career as a journeyman electrician with Simpson Electric, an electrical contractor, IBEW instructor and later as a State Electrical Inspector for both Wyoming and Colorado. Richard is survived by his wife of 55 years Leslie F. Vosler, children, Keith Vosler, Leigh Vosler (Chris Allen), Beth Vosler, Eric (Michelle) Vosler. Brother Dale (Edith) Vosler, Sisters: Betty Stoner, Norma Cooper, Virginia (John) Baird. Eleven grandchildren and seven great grandchildren. Richard was preceded in death by his parents Floyd L & Valborg Christensen Vosler, Brothers: Carl, Lester, Albert, Robert, Glenn and Chris Vosler. Sisters: Edna Humphrey, Mildred Foltz, Margaret Perry and Ruth Beahm Wyatt. Services with military honors will be held at 10:00am Friday, March 5, 2021, at the Cheyenne Evangelical Free Church. Pallbearers are Chris Allen, Zechary Gunther, John Fulk and Matt Vosler. The service will be streamed at: www.cheyennefree.org Friends and family contributions may be made to Wycliffe Bible Translators https://www.wycliffe.org/donate, St Jude’s https://www.stjude.org/give.html or the charity of your choice.

Richard Vosler, lifelong resident of Cheyenne, died peacefully at home Monday evening, March 1, 2021, with his family by his side. Richard was born in Cheyenne, WY on May 7, 1938. He attended and graduated from Cheyenne High and then served... View Obituary & Service Information

The family of Richard A. Vosler created this Life Tributes page to make it easy to share your memories.

Send flowers to the Vosler family.