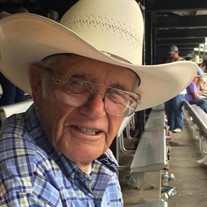 Richard E Gardner, 95, of Pine Bluffs died peacefully on July 11, 2021 in the Torrington Hospital. Richard was born on July 19, 1925 to Myles and Ruth (Ernst) Gardner in Omaha, Nebraska. In 1944, he was drafted into the Navy, where he served before returning home to marry Mary Jean (Polly) Boyce on January 14th, 1950. They were married 64 years and together had 5 children. In 1955, Richard, his father, and his brother, LeRoy formed Myles Gardner & Sons where they farmed and ranched together. Later, Richard and LeRoy became Gardner Brothers and worked side by side for more than 50 years. Richard lived a full life and was never as happy as when he was on his horse. He loved being on the farm and working the cows, rounding them up on the Terry Ranch and the forest, or even just a hot day in the tractor. He enjoyed roping and loved attending rodeos, especially National Finals Rodeo in Las Vegas. He and Polly loved going to UW football and basketball games and they were long-time season ticket holders. He was also an avid bowler and he missed when he was no longer able to bowl. Richard lived an incredible life and leaves behind many loved ones, friends, and one heck of a legacy. Richard was preceded in death by both his parents, his wife Mary Jean, brother Kenneth Gardner, sisters in law Mary and Beverly Gardner, son Terry Gardner, and son-in-law Rodney Paxton. He is survived by a large loving family including brother LeRoy (Glenda) Gardner, sister Ellen (Donald) Strube, daughters; Kathy (Wayne) Tatman, Sandra (Terje) Vangbo, Trudy Paxton, Brenda (Steve) Anderson and daughter-in- law Pam Wiggam. Grandchildren; Shawn (Sarah) Tatman, Todd (Tricia) Tatman, Marty Tatman, Amy (Patrick) Currie, Casey (Coelle) Gardner, Judy (Andrew) Cederholm, Jim (Ashley) Hottell, Ty Anderson, Kayla (Frank) Christensen, Kerby (Troy) Anderson and 19 great grandchildren. A private family graveside service will be held. Memorials can be made to the Pine Bluffs Ambulance and/or the Pine Bluffs Roping club.

Richard E Gardner, 95, of Pine Bluffs died peacefully on July 11, 2021 in the Torrington Hospital. Richard was born on July 19, 1925 to Myles and Ruth (Ernst) Gardner in Omaha, Nebraska. In 1944, he was drafted into the Navy, where he served... View Obituary & Service Information

The family of Richard E. Gardner created this Life Tributes page to make it easy to share your memories.

Send flowers to the Gardner family.