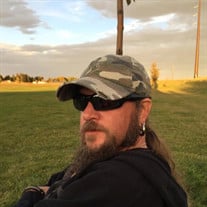 Richard C. Diefenderfer, Jr., 53, of Cheyenne passed away on March 3, 2021 in Cheyenne. He was born on April 5, 1967 in Powell, Wyoming. Rich was a Communication Specialist and Supervisor for the Wyoming Highway Patrol since 1998. He was a member of the Wyoming Highway Patrol Association. He was a coach for his son's teams in the Cheyenne Junior League and most recently the Cheyenne Youth League. Rich attended Cheyenne Schools and was a 1985 graduate of Cheyenne Central High School where he was an all-around athlete in football, basketball and track and a member of two championship teams. Rich also played Senior Babe Ruth and Cheyenne Legion Baseball. After graduation, he attended Northern Arizona University at Flagstaff, University of Wyoming, Laramie County Community College and Video Technical Institute of California at Los Angeles. Rich played the guitar and had a keen interest in photography and video technology. He loved to film concerts of blues, rock and heavy metal musicians, many of whom were friends. Rich loved sports, went to as many games as he could and could quote statistics on players and tell you the latest news for the Avs, Rockies, Broncos and Nuggets on any given day. Rich is survived by son, Max and former wife, Amy of Cheyenne; parents, Richard and Lynette Diefenderfer of Eaton, CO; sister, Andrea Diefenderfer Rusch and husband Karl; nieces Hannah Gustafson, Laurel Gustafson and Shelby Rusch, all of Greeley, CO, as well as numerous aunts, uncles and cousins. Rich was preceded in death by his paternal grandparents, Sheldon and Jean Diefenderfer of Bethlehem, PA and his maternal grandparents, Edward and Elizabeth Bogacz of Riverton, WY. A Celebration of Life will be held at The Office, Wine Country Room, 1600 E. Pershing Blvd., Cheyenne, WY on Saturday, April 3, 2021 from 1:00 to 3:00 p.m. The Richard C. Diefenderfer, Jr. Memorial Fund, c/o FirsTier Bank, Attn. Stacie L. Linger, Senior Vice President, 1508 Stillwater Avenue, Cheyenne, WY 82009, has been established if friends and family wish to contribute.

Richard C. Diefenderfer, Jr., 53, of Cheyenne passed away on March 3, 2021 in Cheyenne. He was born on April 5, 1967 in Powell, Wyoming. Rich was a Communication Specialist and Supervisor for the Wyoming Highway Patrol since 1998. He was... View Obituary & Service Information

The family of Richard C. Diefenderfer Jr. created this Life Tributes page to make it easy to share your memories.

Send flowers to the Diefenderfer family.