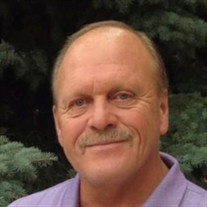 Randal “Randy” F. Weiss, 63, of Cheyenne, passed away peacefully on December 31, surrounded by his family at Davis Hospice Center from his second battle with cancer. He was born in Fort Collins, Colorado on January 21, 1957, to Harry Eugene “Jack” and Carnelia “Connie” (Larchick) Weiss, but grew up in Cheyenne. He graduated from Central High School (class of 1975) and LCCC. On August 1, 1987 he married Amy Gurtler. Randy spent most of his early working years as a welder; he later worked in sales and management at Sears and Lowes. He loved fishing, flipping houses, and family time most of all. Randy was an avid University of Wyoming fan. In 1988 he started the 36 Hour Marathon Softball Tournament, and ran it for 27 years. Randy helped on various projects including Meals on Wheels, North Cheyenne Community Soccer Park, and the new Laramie County Library. Randy had many friends, was loved by so many, and will be missed. He is survived by his wife of 33 years Amy Gurtler Weiss, sons Kyle (Lindsay) and Keith (Tracy) Weiss of Sedalia, Missouri, daughter Danielle (Steven) Schoeber of Cheyenne, mother Connie Weiss of Cheyenne, brother Bruce Weiss of Cheyenne, sister Colleen (Bob) Dunn of Beatrice, Nebraska. Randy also had four grandchildren; Kelsey Weiss, Jaysen Gerke, Abby Weiss, and Cole Weiss, and seven nieces and nephews. Randy was preceded in death by his father, Jack Weiss. A memorial service will be held at Wiederspahn Radomsky Chapel of the Chimes, Wednesday January 6, 2021 at 2:00 PM. It will be live streamed at www.wrcfuneral.com/obituaries

Randal &#8220;Randy&#8221; F. Weiss, 63, of Cheyenne, passed away peacefully on December 31, surrounded by his family at Davis Hospice Center from his second battle with cancer. He was born in Fort Collins, Colorado on January 21, 1957, to... View Obituary & Service Information

The family of Randal F. Weiss created this Life Tributes page to make it easy to share your memories.

Send flowers to the Weiss family.