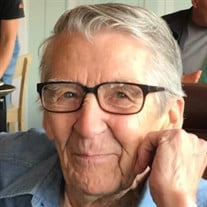 Philip M. Brownell of Cheyenne joined his wife Mary in Heaven on January 13, 2022. Phil was the youngest of 5 boys born to James E. and Forest Hart Brownell on September 25, 1935, in Bloomington, Nebraska. He was raised in Riverton, Nebraska. After graduation, he moved to Horse Creek, WY to work for Great Western Sugar Company in the Limestone mine. He was drafted into the Army and served in Germany. When he came back, he moved to Cheyenne, married Mary L. Cassel and she came with 7 children he loved as his own. He served in the Army Reserves and continued driving to Horse Creek to work in the mine. After the mine closed in 1978, he worked for Board of Public Utilities, and LCCC as A custodian. He retired from LCCC. Phil loved being with his family. After losing his parents during his childhood he knew how precious those moments were and set a great example for others. He lived a full life and kept busy camping, hunting, enjoying nature, and road trips. He loved football, wrestling, reading and old western movies. He was a very kind and generous man, putting others before himself. He was preceded in death, by his wife Mary, his parents, 4 brothers, Taylor (in infancy), Danny, Milford, and David, 3 children Terry and Tim Cassel and Mary Robin Dolan. Left to cherish his memory Connie (Bob) McCaslin, Bonnie (Dan) Graeber, Sid (Sandy) Cassel, Gail (Chris)Cassel, 16 grandchildren, 24 great-grandchildren, 2 nieces, 3 nephews, and their families and his best friend Christian Graham, with whom he had many adventures. He also had a foster son, Charlie Wilson who still came to see him. Phil was a Member of Moose Lodge 257, F.O.E, and the American Legion. Memorial Service will be held at Wiederspahn-Radomsky Chapel on Saturday January 22, 2022, at 2:00 pm. Cremation has taken place.

Philip M. Brownell of Cheyenne joined his wife Mary in Heaven on January 13, 2022. Phil was the youngest of 5 boys born to James E. and Forest Hart Brownell on September 25, 1935, in Bloomington, Nebraska. He was raised in Riverton, Nebraska.... View Obituary & Service Information

The family of Phillip M Brownell created this Life Tributes page to make it easy to share your memories.

Send flowers to the Brownell family.