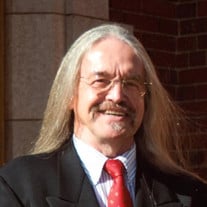 Philip Keith Selvey, 71, of Cheyenne, died on June 1, 2021 in Cheyenne, Wyoming. Parents, John and Fern Selvey, Assembly of God pastors, joyously celebrated Phil’s birth on May 18, 1950, in Mountain Lake, Minnesota. Phil is survived by his daughter, Gigi LeMaster, Brother, Paul (Christine) Selvey, Brother-in-law Ken Granger, Nieces: Kendra (Troy) Henry, Rachel (Tony) Naranjo, Rebekah (Valerio) Marques Dos Santos, Nephews: Kenny John (Brandie) Granger, Benjamin Selvey, Tim Selvey, Grand Nieces and Nephew: Teigen & Alice Granger, Lilly and Anthony Naranjo. Phil was preceded in death by his Parents and his sister, Ruth. Growing up as PKs (pastor’s kids) contributed unique attributes to Phil and his brother Paul, the best of them endearing and enduring. When he graduated from High School, Phil gave Bible college a try, a very short one. Convinced he had a different call, Phil decided to enlist in the U. S. Coast Guard. His service (1970-1974), a time that included his first marriage, left a distinctive impression on Phil, (one he highly suggested Paul enjoy from afar), earning beneficial experience and an Honorable Discharge in the process. Later maturity brought a greater appreciation for that time of his life. Phil made his way to Cheyenne, Wyoming where his first marriage ended but other relationships blossomed. There he went to work as an enthusiastic salesperson until he found an even better job at the local refinery. Phil eventually began a 22-year career on the road transporting lab specimens and solving logistical problems for a large medical testing firm serving Colorado and Wyoming. Fiercely independent, he worked hard to establish himself and sought to live life to the fullest, building relationships and developing wisdom as he went. During his life, which was not always easy or kind, Phil loved and lost and loved again, trying to find just the “right” formula for happiness in life without letting it get him down or causing harm. As with many his success was mixed leading him to instead choose solitary and inquisitive pursuits. He was a loyal friend to many who now miss his unique sense of humor and easy laugh. Eventually, Phil rediscovered faith and support at Rez Church in Colorado, and from that day to this found true lasting redemption, HOPE and PEACE in Jesus Christ. He will be missed.

The family of Philip Keith Selvey created this Life Tributes page to make it easy to share your memories.

Send flowers to the Selvey family.