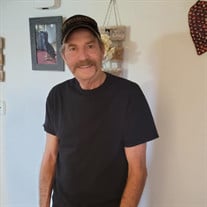 Patrick T. Rhynsburger, loving husband, father, grandfather, son, brother, and friend passed away June 19, 2021. Patrick was born March 29, 1959, in Laramie Wyoming to Robert and Nancy Rhynsburger. He graduated from Berlin American High School, Berlin, Germany in 1977 and continued his education at Eastern Wyoming College on a basketball scholarship. In his lifetime he worked several jobs in the construction field, at US Welding, and most recently at the Cheyenne VA Medical Center for the past 18 years until he retired in 2017. Pat was passionate about veterans and it was his honor to be of service to them. Pat enjoyed hunting, camping, fishing, golf, softball, running his dog in the mountains and anything to do with the “great outdoors”. He was chosen to deploy and help with the Hurricane Katrina relief effort and was a member of the American Legion honor guard. Patrick is survived by his wife; Sheila; son, Ryan; daughters, Brittany (Seattle), Umi, and Tasha (Diego) Nelson; sisters, Lori (Steve) Wilson and Lisa Pace; grandchildren, Tyce, Taylee, Jonathan, and Rasheya; best friends and in-laws, Donnie and Chrissie Nelson; brothers-in-law, Bill Nelson and Ron Nelson; aunts, Kathy Rhynsburger, Pat Amberg, Margaret Clarke, Rosemarie Kilgore, numerous cousins, and his beloved dog, Max. He is preceded in death by his parents; brother, Michael; brother-in law, John Pace; his father-in law and mother-in law, Don and Lois Nelson; uncle, Tom Amberg; aunts, Marlene Schlager and Frances Glass. A celebration of his life will be held Wednesday June 30th 2021 at the AmVets, 3839 E. Lincolnway from 3:00pm-6:00pm. In lieu of flowers, donations can be made to the “Flag and Cemetery” fund ATTN: Russell Telander, American Legion Post 6, 2001 E. Lincolnway, Cheyenne WY 82001 for the purchase of American flags for veteran’s graves.

The family of Patrick T Rhynsburger created this Life Tributes page to make it easy to share your memories.

Send flowers to the Rhynsburger family.