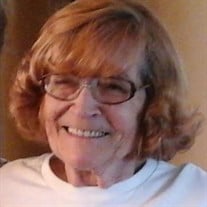 Patricia A. Svec, better known as Mami by her children, grandchildren, and numerous neighborhood children, left her earthly life to go dance on the tables in heaven on July 5, 2021. She was 76. Mami was a sassy, opinionated, and caring mother, grandmother, and great grandmother who was loved by so many. She was perhaps best known by her short cut, bright red hair. She was a connoisseur of delicious foods and a master chef in the kitchen. Her coffee cake, cinnamon apples, and guacamole were world famous. She prided herself on her well-developed palate and would often boast that she could name 16 out of the 19 spices in a dish with just one taste. There was never an empty stomach when you were at Mami's house. She was an avid reader, and she had a voracious appetite for learning and teaching. She enjoyed sharing her love for books by donating thousands of them to the local library and sending family members copies of recent favorites. She cherished stimulating conversations, whether with family or strangers, and never missed an opportunity to discuss history, science, or politics. Not to be outdone by her trademark red hair, Mami was equally well known for her old blue truck. She drove that truck thousands of miles with countless children, friends, and dogs packed inside. Her blue truck was often seen traveling for baseball tournaments, soccer practices, and ice cream runs. Though she despised the heat, her favorite part of summer was eating Dryer's chocolate ice cream for breakfast, lunch, and dinner. She was a jack of all trades, and an expert in many facets of life. She never went anywhere without a purse stocked full of mints, spare change, and a box cutter (of course), because you can never be too prepared. Though Mami was small, she was mighty, and she was fearless. She loved her family, work, traveling, and telling stories about her life. She was greatly loved and will be so dearly missed. Her lasting piece of advice would be to "just eat the cake." She is survived by her children, Traci (Dennis) Strong, Joe (Carri) Svec, and Kelly (Harry) Eberle; her grandchildren, Crystal Stewart, Joe Stewart, Kerry (Charles) Nation, Stephen Garcia, Ty Svec, Jacob Strong, and Zachary Strong; her great grandchildren, Eden Nation, Emry Nation, and Kylie Leonhardt; and her siblings, Atticus Carr, Phillip Carr, Janice Pool, and Phyllis Petrson. She was preceded in death by her husband Charles E. Svec; son, Charlie Svec; parents, Phillip and Mary Carr; and brother, Kevin Carr. Donations in her honor can be made to Planned Parenthood, Cheyenne Animal Shelter, or a charity of your choice.

Patricia A. Svec, better known as Mami by her children, grandchildren, and numerous neighborhood children, left her earthly life to go dance on the tables in heaven on July 5, 2021. She was 76. Mami was a sassy, opinionated, and caring mother,... View Obituary & Service Information

The family of Patricia A. Svec created this Life Tributes page to make it easy to share your memories.

Patricia A. Svec, better known as Mami by her children, grandchildren,...

Send flowers to the Svec family.