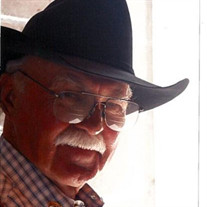 Norman R. “Doc” Swanson was born December 6, 1936, to Carl and Adelia (Nelson) Swanson in Longmont, Colorado and passed away peacefully at Davis Hospice on January 30, 2022. The 3rd of 4 boys, Norm grew up farming and raising cattle with his brothers. Norm played high school football and ended up in Ripley’s Believe It Or Not due to a pass he threw, received from a lateral pass, then ran in for a touchdown. He attended Colorado State University for both his undergrad and veterinary school degrees. Norm practiced briefly in Torrington, Wyoming where he married Susan Hager. They moved to Cheyenne in 1968 when Norm accepted the State Veterinarian position for the State of Wyoming where he remained until his retirement in 1991. After retirement he enjoyed working with the USDA in Mexico as a monitor for a spayed heifer program and learning ‘espanol de coralles’. Together, Norm and Susie had 4 children, they later divorced. Norman and Linda were married in 2003. Norm was a CFD Heel, member of the Contestants Committee and served as the Cheyenne Frontier Days arena veterinarian for more than 44 years. In his younger years, he enjoyed roping on Ol’ Black, and later, helping and hauling his kids with countless 4-H and FFA projects, he enjoyed one good horse, a few good dogs, and more than anything liked looking out of the barn, “listening to the calves and grass grow”. He was preceded in death by his parents, two brothers, John and Marvin, and Susie, as well as stepson Mark Moore. Norman is survived by his wife, Linda, his four children, Justin, Lisa, Katie, and Kelly; his grandchildren, Tanya, Ashley, Kelsie, Austin, Reese; three great grandchildren, his brother, Dick Swanson and his wife Bonnie, a niece and several nephews, his stepchildren, Jamie, Lisa and Tommy, and numerous friends and ‘pardners’. His good friend Doc Rogers said it best, “I wasn’t much of one for funerals so I think I’ll skip this one." A Celebration of Life at the Cheyenne Frontier Days Event Center will be Thursday, March 24th, at 2:00 p.m. The family would like to extent an enormous heartfelt thank you to the wonderful staff at Davis Hospice who cared for him as though he was their own “Pop” for nearly a year. Please, if you’re inclined, send donations to Davis Hospice or Cheyenne Frontier Days Scholarship Fund.

The family of Norman R. "Doc" Swanson created this Life Tributes page to make it easy to share your memories.

Send flowers to the Swanson family.