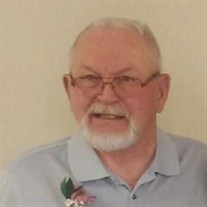 Norman Dale Mullikin, son of the late George Mullikin and Margaret Elizabeth VanOrman, was born June 27, 1932 in Horseheads, New York. Dale attended the Steuben County public schools, graduating in 1951 from Avoca High School where he lettered in wrestling and belonged to Future Farmers of America. Dale enlisted in the Air Force out of high school, marrying his high school sweetheart, Mary Ann Winslow, on September 1, 1951, before beginning their travels around the world. Dale served his country during the Vietnam conflict, later retiring after twenty-two years in the service as an airplane and diesel mechanic. Continuing his respected career in mechanics, Dale worked for Walton Ford Motor Company in Cheyenne, Wyoming, retired and began working for the County as a diesel truck mechanic. Dale enjoyed his time with Laramie County as he spent many a trip in the Rocky Mountains, delighting in the scenery while repairing trucks. After three retirements, Dale continued to serve his community, friends, and family by offering his gifted services to any in need. As a young man, Dale professed his faith in Jesus Christ as his Savior and joined the Berean Fundamental Church of Cheyenne where he was a dedicated member: usher, choir member, and served on several boards. During his thirty years living in Cheyenne, Wyoming, Dale and his wife, Mary Ann served their community by delivering meals for Meals on Wheels. Later, after moving to Texas, Dale continued to deliver meals for Meals on Wheels, serving the two communities for over thirty years. Dale was preceded in death by his wife, Mary Ann of sixty years, after she suffered a prolonged illness of Alzheimer’s. He was also preceded in death by his second wife of two years -Billie Catherine Sallee, formally of Cheyenne. Dale was preceded in death by his two sisters and six brothers, all of New York. He is survived by one brother, James Mullikin of New York. Dale is survived by his six children: Margaretann Hartman of Florida, Jonathan Dale Mullikin, Teddie Sue Hytrek, David Wayne Mullikin, and Paul Winslow Mullikin all of Leander, Texas and Mary Jo Birt of Wheatland, Wyoming. Dale is survived by 21 grandchildren and 39 great-grandchildren. His beautiful life will forever be cherished in the lives of his children, grandchildren, and great-grandchildren and all those who knew him. As a result of his generous spirit and pleasant personality, Dale was loved by many. His Christian life was an influence that will forever remain in the lives of all who knew him. Dale quietly departed this life on Tuesday, December 22, 2020 at Baylor Scott and White Hospital in Round Rock, Texas.

The family of Norman Dale Mullikin created this Life Tributes page to make it easy to share your memories.

Send flowers to the Mullikin family.