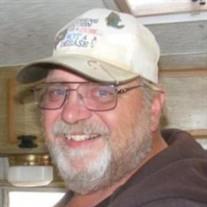 Norman Durwood Blachowski, 62, beloved Husband, Dad, Brother, Grandpa, "Pops", Uncle and Friend, left this Earth and was welcomed into Heaven by the Angels on Monday, May 24, 2021. Norm was born December 7th, 1958 to Jerome Ritzer and Helen Blachowski in Cleveland, Ohio. He was the youngest of 6 and was especially close to his sister Jackie as they were only 11 months apart. Norm shared fond memories of road trips and vacations his family took growing up and even remembered sitting in the bar while his Daddy had a beer. As Norm got older, he found faith and joined a Christian Ministry that led him to Philadelphia where he met his first wife, Deanna. They traveled around before finally settling in Deanna’s hometown, Cheyenne, Wyoming. This is where Norm would place his roots. After 15 years and a little girl, unfortunate circumstances lead to a divorce and Norm became a single dad, raising his daughter on his own. He was such a proud father and did everything he could to give her the very best life; she was his pride and joy. Everyone who knew Norm knew how hard he worked. There were no short cuts, he worked for everything he had and everything he gave to others. Norm had various jobs in his younger years but found a career with APW Wyott. He dedicated 30 years there, spending the majority of them spot welding. He made so many great friends over the years, some of which became family. Stormin’ Norman, they often called him. Norm was finally blessed with the love of his life, Terry, they were married 6 months later. He and Terry enjoyed a wonderful happy life together and these were some of Norm’s best years. When Norm found Terry, he not only found love, but he also found a best friend, and an entire family that welcomed them with open arms. As two families joined together, they built memories that will last a lifetime. Norm had very strong faith and love for God and the Bible’s teachings. He had the biggest heart and such strong love for those close to him. He was always quiet at first, but once he became comfortable, he always had a funny joke to tell, great story to share, or words of wisdom to bestow. Norm was a seasoned fisherman and could catch more fish while taking a nap than awake most of the time. From pool leagues and poker games to camping trips and nights downtown, Norm always knew how to have a good time. He was truly a great, and gentle man. There are not enough words to do justice to who he was and the love he gave, Norm was loved by all who knew him and will be missed beyond measure. Norm is survived by his wife, Terry Blachowski, daughter Tamera Wilde (Andrew), daughter, Sherry Boryczko (Steve), daughter Jennifer Quintana, son Donovan Stevenson (Kathy), sister Jackie Leach (Bob), and countless nieces, nephews and grandchildren who love him dearly. He was preceded in death by his father, Jerome Ritzer, mother, Helen Blachowski, his older brothers, Alois and Frank Blachowski, an older sister, Sandy Milczewski, and an infant sister, Patty Blachowski. A Celebration of Life will be held at Holiday Park by the Train on 7/17/2021, more information to come from the family.

Norman Durwood Blachowski, 62, beloved Husband, Dad, Brother, Grandpa, "Pops", Uncle and Friend, left this Earth and was welcomed into Heaven by the Angels on Monday, May 24, 2021. Norm was born December 7th, 1958 to Jerome Ritzer and Helen... View Obituary & Service Information

The family of Norman Durwood Blachowski created this Life Tributes page to make it easy to share your memories.

Send flowers to the Blachowski family.