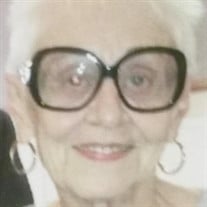 Myrna Jeane (Cameron) Lewis joined her heavenly father on January 3, 2021, after a courageous battle with lung cancer, but her strong, independent, generous spirit will continue to live on in those who loved her. Myrna was born on January 27, 1935 in Tecumseh, Nebraska to Marion and Blanche (Kinney) Cameron. She grew up in Cheyenne Wyoming with her younger brother, Guy. Her strength and generous spirit were evident at a young age. As children, she noticed her brother going out of his way to get home from school. When Myrna asked why, she learned Guy was being bullied. The next day, she "gave the bully a twirl" and Guy was left alone from then on. “Sis” was always there for Guy throughout their lives. Myrna attended Cheyenne Central High School class of 1954 and enjoyed her involvement in many class reunions over the years. Myrna had a long, successful career. She began as a bank teller in Laramie, Wyoming and later moved to Cheyenne where she served as the operations officer at American National Bank. She was awarded with a plaque commemorating 25 years of dedication and loyalty to the banking community. She went on to work for the State of Wyoming in the workman’s compensation office and enjoyed a 10 year career with them making many friends and acquaintances along the way. Myrna was a fiercely loyal friend to those who knew her best. She was kind and generous, always helping those in need. One of her favorite activities with her friends was going to Las Vegas which she enjoyed as often as she could. She also enjoyed painting and has beautiful acrylic paintings proudly displayed throughout her home. Her friends remember her as strong and independent, and one who didn't let trivial things bother her. Myrna was an amazing mother to Scot, her only child. She raised him primarily as a single mother and guided him by example with a strong work ethic, unconditional love and a sense of humor. Once Scot left Cheyenne to attend college and later pursue a career, he frequently made trips back to Cheyenne to visit and perform various handyman duties. Without fail, he was rewarded by a meal of Myrna's famous liver and onions and her signature cocktail, a vodka martini. Scot was honored to have taken care of Myrna throughout her battle with cancer and was blessed to be with her during her final weeks. She was also a proud grandmother to twin sisters, Loryn and Jordyn. They admired her for her ability to tell stories and have fond memories of Vegas. She bought them white sandals one year and told them they could be runway models! Myrna is preceded in death by her parents Marion (Felix) and Blanche Cameron. She is survived by her brother, Guy, her son Scot (Lori), granddaughters Loryn (Jake) and Jordyn (Jake) "Your life was a blessing and your memory a treasure. You are loved beyond words and missed beyond measure."

Myrna Jeane (Cameron) Lewis joined her heavenly father on January 3, 2021, after a courageous battle with lung cancer, but her strong, independent, generous spirit will continue to live on in those who loved her. Myrna was born on January... View Obituary & Service Information

The family of Myrna Jeane Lewis created this Life Tributes page to make it easy to share your memories.

Send flowers to the Lewis family.