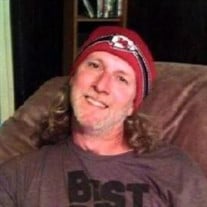 Michael Anthony Yeager (Mike), 50, of Cheyenne, Wyoming passed away unexpectedly June 1st, 2021, in Cheyenne, Wyoming. Michael was born on March 10th, 1971, in Lebanon, Oregon to Melvin and Maria (Szasz) Yeager. He moved to Cheyenne, Wyoming in 1990. He then met the love of his life Kassie Wise. They got married on June 5th, 1999. They had two beautiful children. Madison Yeager in 2001 and Miles Yeager in 2003. Mike had a passion for cooking, music, and the Kansas City Chiefs. Mike always made friends wherever he went. He loved his family more than life itself. He is survived by his wife Kassie Yeager. His children Madison and Miles Yeager. His father Melvin Yeager of Oregon. His siblings Stephen Yeager, Donna Yeager Schackmann, Natalie Taylor, and Paula Whitt of Oregon, Christine Spencer of California, and Larry Yeager of Colorado. His in-laws Robert and Jean Wise of Cheyenne. His brother-in-law's Eddie Wise and Nick Wise (Jana), sister-in-law's Lacie Wise (Nate) all of Cheyenne and Jamie Wise (Eric) of Colorado. Numerous nieces, nephews, aunts, uncles, and cousins. He is preceded in death by his mother Maria Yeager, brother Peter Yeager and brother-in-law Kris Wise. There will be a viewing from 9am to 4pm on Tuesday June 8th, 2021. Funeral services will be held on June 9th, 2021, at 10am at Wiederspahn. A Celebration of Life to follow will be at 1pm at the VFW 1881, Cheyenne, Wyoming. He was truly an amazing man and will be greatly missed beyond words.

The family of Michael Yeager created this Life Tributes page to make it easy to share your memories.

Send flowers to the Yeager family.