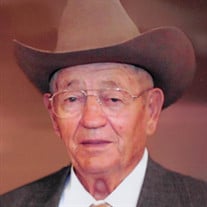 Melvin Lavere (Mel) Zwonitzer, 95, of Cheyenne, passed away Wednesday, September 16, 2020 at Aspen Wind Memory Care Center in Cheyenne. Mel was born October 22, 1924 in Netawaka, Kansas to John and Bertha (Brunner) Zwonitzer. He began working away from home on farms when he was twelve years old. He married Mary Lucille Sanner on Nov. 10, 1945 in Netawaka and they were married 72 years until Mary passed away Feb. 7, 2018. Mel served in the Army as an aviation mechanic at the end of WW II. In 1956 Mel and his young family moved to Cheyenne, where he worked as an instruments mechanic at Husky Refinery until his retirement. He became an auctioneer in 1961, starting Mel's Auction which later became Western Auction and conducted thousands of sales in the area for over 50 years. Mel also assisted John Easterwood in starting the Cheyenne Saddle Tramps and organized the group's forty-person five day trail ride from Cheyenne to Rawlins. Mel was a Hall of Fame Member of the Wyoming Auctioneers Assn., served for many years on the Cheyenne Frontier Days Grounds Committee and was a CFD Heel since 1971. Mel was also a farrier for many years. He loved horses, tractors, fixing things, welding pipe fences and special gate latches, country music, baseball and fishing. Mel is survived by his son Donald (Charlene) Zwonitzer of Kimball, NE, son David L. (Kym) Zwonitzer of Cheyenne, sisters Marjorie Grieves of Topeka KS, and Bernice Rogers and Roberta Reiman, both of Milwaukee, WI. He is also survived by six grandchildren: Dustin Zwonitzer of Kaysville, UT, Darren Zwonitzer of Chicago, IL, Jenny Jessee of Grants Pass, OR, Janelle Anderson of North Platte, NE and Dan and Ty Zwonitzer of Cheyenne, their spouses and 18 great-grandchildren. He was preceded in death by his wife, his parents, his twin sister Melvina Laverne Harris and his brother John Zwonitzer Jr. Services will be held at Wiederspahn-Radomsky Chapel on Monday, September 21 at 2 p.m. Viewing will be prior to the service from 9:00 a.m. to 1:30 p.m. Burial will take place after the service at Lakeview Cemetery. Friends who wish may contribute to the Cheyenne Saddle Tramps, P.O Box 2062, Cheyenne, WY 82003.

The family of Melvin Lavere "Mel" Zwonitzer created this Life Tributes page to make it easy to share your memories.

Send flowers to the Zwonitzer family.