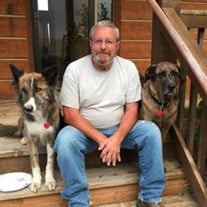 Maurice “Moe” Myers, 72, of Cheyenne, Wyoming, passed away August 17, 2020, at Davis Hospice Center in Cheyenne, WY. He was born December 31,1947, in Council Bluffs, Iowa, to Christopher and Ida (Nicks) Myers. Maurice was raised on his parents’ farm in Henderson, IA, and graduated from Red Oak High School in 1967. He proudly served his country in the U.S. Army from August 1968 to March 1970 and was in the Vietnam War as a helicopter mechanic. In later years he served in the Nebraska Air and Army Guards. Maurice met Christy in late summer 1982, and they have been happily married since November 24, 1983. He retired from Parker Hannifin in Red Oak, IA, in 2009, and they moved to Cheyenne, Wyoming, where he was active in the American Legion Honor Guard. Maurice also volunteered at the VA Medical Center. He enjoyed hunting, and trap shooting, and was a member of the Cheyenne Rifle and Pistol Club. Moe shot his first elk in 2018 on what his friends named "Moe Ridge". He loved spending time with numerous friends during the annual horseback riding/camping trips at Ft. Robinson and in the Black Hills. Moe touched many hearts with his kind spirit. No one was a stranger to him, and he helped anyone in need. He had a great sense of humor and lived everyday like it was better than the one before. Maurice had a strong faith in God. He was looking forward to going to his Heavenly Home. No words can express how much he will be missed by his family, friends, and his beloved dogs, Yogi and Moxie. Maurice is survived by his wife, Christy; son, James Myers and his wife, Lori and grandchildren Nola and Nile of Sorrento, Florida; and by numerous nieces, nephews, cousins, and friends. He was preceded in death by his parents; brothers, Barton, Columbus, James, and Ray, and his sister, Geraldine. A memorial service with military honors will be celebrated on August 29, 2020, at 10:00 am. at Wiederspahn-Radomsky Chapel. (Please wear a mask). Services will be held in Henderson, Iowa, at a later date, with internment at Farm Creek Cemetery. In lieu of flowers, donations may be made in Maurice’s name to CRMC Cancer Center or Shriner’s Hospital. Expressions of care can be sent to www.wrcfuneral.com.

The family of Maurice "Moe" Myers created this Life Tributes page to make it easy to share your memories.

Send flowers to the Myers family.