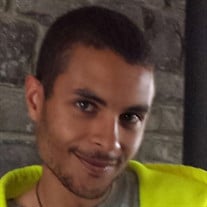 Matthew Fails, Matt to his friends and family, passed away Wednesday, November 17, 2021. Those who were close to him remember how he loved to gaze at the stars, his adoration for his dogs, that he was an avid reader with a thirst for knowledge, and how much he loved video games. Mass Effect, Skyrim, And Zelda: Ocarina of Time were some of his favorites. Matt was intensely creative with many outlets for his creativity. He loved cooking and would often play around with recipes. He relished in expressing affection for others through his food. He enjoyed photography, science and engineering, and experimenting with different hairstyles. He was often affectionately referred to as "The rock star of the office" by his co-workers, due to the bright colors and edgy styles he adorned. Matt was incredibly hard working and determined. He recently earned his Masters Electrician License. He had plans to get his general contractors license with aspirations of starting his own business, "Never Fails Electric." He was smart, meticulous, and had a quick-witted sense of humor. Most of all, the people close to Matt remember his kindness, his compassion, and his generosity. Matt felt a deep responsibility to help anyone he could in any manner possible. He would often go out if his way to donate his time, knowledge, and other resources to those whom needed it. He knew that it was the little things that made all the difference in a person's day and ultimately, a person's life. Matt knew this because of all the acts of kindness and support he received from those he cared about during his lifetime. Witnessing and being on the receiving end of the gentle way he interacted with those around him, has left a lasting impact on his family, friends, and countless others. Matt is survived by family in Wyoming, Oklahoma, Illinois, Wisconsin, Georgia, Idaho and Florida along with a legion of coworkers and friends, all of whom he considered family as well. He was loved by many and it is felt in abundance during this agonizing time without him. Those wishing to make a donation in Matt's honor may do so to Grace For 2 Brothers. Link for their website is https://gracefor2brothers.org/ and the phone number is 307-256-3344.

Matthew Fails, Matt to his friends and family, passed away Wednesday, November 17, 2021. Those who were close to him remember how he loved to gaze at the stars, his adoration for his dogs, that he was an avid reader with a thirst for knowledge,... View Obituary & Service Information

The family of Matthew J. Fails created this Life Tributes page to make it easy to share your memories.

Matthew Fails, Matt to his friends and family, passed away Wednesday,...

Send flowers to the Fails family.