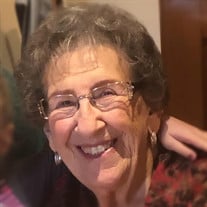 Mary Ann Kuschel passed away May 13, 2022 in Wasilla, Alaska at the age of 88 years. Mary was born February 13, 1934 in Detroit, Michigan to Mary and Walter Kay. She married the love of her life, William A. Kuschel in 1954. Mary enjoyed 20 years as an Air Force wife raising two children, William and Mary Kay. She lived in many places across the United States and abroad. After Bill’s retirement, they settled in Cheyenne, Wyoming where Mary lived most of her life on their ranch east of town. When she could no longer live alone, she moved to Wasilla, Alaska to be closer to her daughter. Following Bill’s retirement from the Air Force, Mary worked for the Wyoming Department of Revenue. She also founded her own business called Flower Garden and Gifts. She sold Wyoming-made products for 40 years and was a frequent vendor at craft shows and bazaars in Cheyenne, Laramie, and Wheatland. Mary was a member of Holy Family Church on Frances E. Warren Air Force Base and Saint Mary’s Cathedral in Cheyenne. She was active in many groups including Military Wives, State Employees Retirees, St. Mary’s Cathedral Guild, Vacation Club and Bishop’s Guild. She did volunteer work for Cheyenne Regional Medical Center, Cheyenne Civic Center, and Laramie County 4-H; to name just a few. Mary is preceded in death by her husband William A. Kuschel. She is survived by her son Willy of Cheyenne, Wyoming and daughter and son-in-law, Mary Kay and Keith Wardlaw of Wasilla, Alaska. Mary also leaves behind two grandchildren Kendra and Kevin (Jessica) Wardlaw, and two great-grandchildren, Kadence and Charlie; all of Wasilla, Alaska. In lieu of flowers, Mary requests donations to rebuild Saint Catherine of Sienna Church in Alaska. (Catholic Bishop of Northern Alaska, 1312 Peger Road, Fairbanks, AK 99709; dioceseoffairbanks.org). Following a mass at St. Mary’s Cathedral June 22, 2022 at 10:30 am, Mary will be laid to rest next to Bill at the Frances E. Warren AFB Cemetery.

Mary Ann Kuschel passed away May 13, 2022 in Wasilla, Alaska at the age of 88 years. Mary was born February 13, 1934 in Detroit, Michigan to Mary and Walter Kay. She married the love of her life, William A. Kuschel in 1954. Mary enjoyed 20 years... View Obituary & Service Information

The family of Mary Ann Kuschel created this Life Tributes page to make it easy to share your memories.

Send flowers to the Kuschel family.