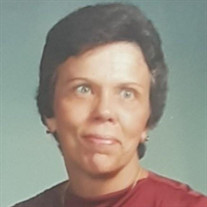 Mary "Janet" Hanley, 79 of Cheyenne Wyoming passed December 19, 2020 at Davis Hospice Center where her family filled the room the day of. Janet was born on May 18, 1941, in Fort Collins, Colorado. She was the second child of five to Phillip and Mary Parsoneault of Cheyenne Wyoming. She graduated in 1959 from St. Marry's Catholic High School where she was a cheerleader. Her first job was a Candy Striper and Switch Board Operator for DePaul Hospital. Her careers continued on always in fields where she could help people. Working as a typist and stenographer for the County Welfare office, continuing on she became the Director of Health and Human Services for the State of Wyoming. Janet retired from the State of Wyoming in 1984. to become a freelance Contract writer, writing manuals for foodstamps and other state and local agencies. Janet Graduated Cum Laude with a Bachelor degree of Psychology from Chapman University all while raising four kids, working full time and going to college all to better their lives. Janet always had a book of the most current novel in hand. Janet honored and helped each individual child become beautiful loving individuals. She loved teaching her Grand children and Great Grand children cooking, reading, writing. Janet met the love of her life Terrance “Terry” Hanley while working for the State of Wyoming. She had four children Phil Lane, Thad Lane, Matt Lane, and Renee Lane. Her late husband, Terry had three children, Sandy Trofolz, Scott Sharp, and John Sharp. Her family combined to make very many large family gatherings which Janet gracefully hosted under open invitation to all! She hosted many family game nights and made many fun memories. Janet was an avid Bronco football fan and loved to host Bronco games with many "Bronco treats”. She made every holiday, birthday, and even lunch for the High school grand kids that would jump the fence to see her on their lunch break a special event! Her cooking will be missed by many! Special recipe cards and books that were hand written by Janet will be cherished. Janet loved to travel and enjoyed her travels through the States and several trips through Europe. Janet was an animal lover and cherished raising the many dogs that her children would bring home. Janet's home was always open to family and friends and furry animals and many would show up often. Janet's Grandchildren and Great Grand children would run in the house up the stairs yelling "Grandma! We are here!" as they often arrived to visit, and this will be deeply missed. Most recently many doctors, nurses, CNA's and aids became Janet's heros, and were constantly telling her family what a sweet, kind and funny person she is! Janet said she was given a gift from God as she was cared for with compassion and love. We will forever be thankfull to her heros! Janet is survived by and loved by: Her sister Phyllis and Bill Hopkins; Her brother Patrick and Roxanne Parsoneault of Cheyenne; Her son Phillip and Anna Lane of Cheyenne, son Thad Lane of Vancouver WA; daughter Renee Lane and James Baker of Cheyenne WY; Step-children Sandy and Greg Trofolz, Scott Sharp, John and Jennifer Sharp. And loved by her Grandchildren: Jordan and Christie Lane of Argyle, TX; Jessen Lane and Naomi Russell of Denton, TX; Nicole Crider of Overland Park KS; Corey and Brianna Wheeler of Cheyenne, Wyoming, Thad Lane and Mrdee Clarke of Laveen, AZ. Abby Lane of Cheyenne WY; And extremely loved by her Great Grandchildren Devin and Sahdeya Crider; Ella and Eli Lane; Ryan and Indee Harrison; Roman and Claire Wheeler: and Bridger Lane: Niece Megan and Wess Dabb and Great nephews Clinton and Dakota Dabb. Special mentions: Charlene Nation, Kim Sullivan; and many more Nieces and Nephews were loved and never forgotten. Janet was preceeded in death by her parents Phillip and Mary Parsoneault, her husband Terrance Hanley, her beloved and favorite son Mathew Lane, brothers Mickey Parsoneault, and Denny Parsoneault. "Never Forget! Even when you are not with us, you still love us!" Janet's family is forever grateful to the healthcare workers, and those that coordinated her care. Janet will be cremated and laid to rest in a plot next to her husband at Cheyenne Memorial Gardens. Janet's wishes will be met with no funeral, she would like everyone to stay safe during the times of Covid-19.

Mary "Janet" Hanley, 79 of Cheyenne Wyoming passed December 19, 2020 at Davis Hospice Center where her family filled the room the day of. Janet was born on May 18, 1941, in Fort Collins, Colorado. She was the second child of five to Phillip... View Obituary & Service Information

The family of Mary Janet Hanley created this Life Tributes page to make it easy to share your memories.

Send flowers to the Hanley family.