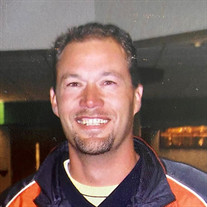 Marvin Von Mirich, husband, father, brother, son, uncle, friend and Coach to most everyone else, passed away on Sunday the 21st of February 2021, after a courageous, hard fought battle with pancreatic cancer, and albeit brief, he leaves behind a lifetime of wonderful memories and great accomplishments. Marv was born on the 13th of May 1968, in John Day, Oregon the youngest son of Carl and Deanna Mirich. From Oregon, the family moved to Wyoming. Marv was a fierce competitor and gifted athlete. He loved all things sports, playing, coaching, and watching. As a 13-year-old he started on his older brother's legion baseball team comprised of 17- and 18-year-old boys. He was a 2-time little league baseball all-star and regional champion. His high school sports career was highlighted by many accomplishments including being a multiple sport All-State athlete. He culminated his high school career by being selected for the North vs. South Wyoming Shrine Bowl as well as the Wyoming/Montana All-Star Basketball Series. Upon graduating from Moorcroft, Wyoming in 1986, Marv accepted a scholarship to play basketball at Sheridan College. After two years at Sheridan, he then transferred to Black Hills State and played both basketball and football for one year before deciding to focus on his football career and finish out his college days as a 2x NAIA All-American wide receiver. Owing to Marv's success and leadership on the football field, he was inducted to the Black Hills State University Hall of Fame in 2002. While in college Marv obtained his Bachelor of Science and Physical Education degree and then promptly accepted his first teaching position with Laramie County School District #2. He taught History, Health and PE in addition to coaching Football, Basketball, and Track. He continued to coach the sport he loved with the Cheyenne South Football Team. Marv's great success in sports followed him into his coaching career. In 2013 he was the 2A Southeast Conference Coach of the Year and in 2014 was the South's assistant coach for the Shrine Bowl. Marv had a reputation for being a 'tough' coach, a coach who had discipline, rules, standards and zero acceptance for bad attitude and effort. He taught kids to earn it, to work hard for it, to be challenged by it and to fail at it. He believed that is how you made them better people and students for life, not just for sports. Being that "8" was his football number Marv thought it appropriate that he and Danna should wed on 8-8-98, she agreed knowing that there would never be any excuse for him to forget their anniversary. On October 18, 2000, on March 29, 2002 and on January 21, 2004 respectively, he welcomed his three beautiful daughters, who were the most important part of his life. Marv is survived by his wife Danna and their three daughters, Madisyn, Jakobi, and Drue; his mother, Deanna; his two brothers, George (Kaye) and Rock (Kari); and grandmother, Geraldine. Marv was the best uncle ever to many nieces and nephews and loved his extended family of aunts, uncles, and cousins unconditionally. Marv was preceded in death by his father, Carl Mirich; and his grandfather, Stephen Mirich. Marv was a dedicated father first and foremost. He treasured his children and embraced every moment with them, he especially LOVED watching them play sports. He had a unique personality and always made people around him feel loved. He made friends everywhere he went and the multitude of completely loyal friends he had was a testament to the respect Marv had earned throughout his life. You could often find Marv on the golf course, cheering for the Buffalo Bill's, working on his bowling skills, hunting, fishing, and coaching all things, including bull riding. We will never forget Marv's "chuckle" while dishing out a hard time to one of his buddies. He was ALWAYS unapologetically MARV. Services for Marv will be held Tuesday, March 2nd, 2021, 2:00 p.m., at the Albin Community Center. A chance to share all your Marvelous Marv stories will take place immediately after the service while we enjoy refreshments. In lieu of flowers the family asks that you consider donating to further the education of his three daughters, in care of Danna Mirich, PO BOX 1264, Cheyenne, WY 82003.

Marvin Von Mirich, husband, father, brother, son, uncle, friend and Coach to most everyone else, passed away on Sunday the 21st of February 2021, after a courageous, hard fought battle with pancreatic cancer, and albeit brief, he leaves behind... View Obituary & Service Information

The family of Marvin Von Mirich created this Life Tributes page to make it easy to share your memories.

Send flowers to the Mirich family.