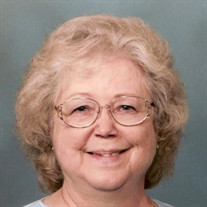 Marlene Lyday has left us. She finally let go held tightly in the arms of her daughter Brenda, taking with her a piece of each of us. Born, Marlene Ruth Derr in 1938 to Floyd and Helen in Doniphan, Nebraska. Marlene was soon nicknamed Cyd, short for “Cydder”, her brother Jerry’s word for sister. The family moved from Nebraska to Wyoming as it continued to grow, soon there were seven children and two adults comfortably sharing (or squashed into) a two-bedroom house in the middle of Cheyenne. Marlene graduated from Cheyenne High School in 1956. She met her first and second and only husband James Lyday in Cheyenne. She worked as a telephone operator for Mountain Bell. Following her marriage, she transferred as an operator in Denver. That’s right, cat-eyed glasses, wash and set, and cracking gum she was the person taking the call and plugging you into the person on the other end. They lived in Thornton where they welcomed their two baby girls, Shelly and Brenda. Marriage is not always bliss, and that was the case for her. With two small children, Marlene began her long stint as a single parent, strong woman, amazing do it all for every human, or basically a “bad-ass”. She worked hard, holding a job in the secretarial field for years and years. Always picking the fields that would prosper (or not) – mining, mortgage, and the like. Forever a woman with a sarcastic feisty opinion at the ready she raised her girls to be independent and strong. She never did forego the opportunity to make a dress for a dance (always at least two sizes too big and never quite finished), cheer them on at each and every sporting event, concert or the like, and made sure they had everything they needed. Her family was tight-knit, and she was very close with her brothers and sisters, but her closest relationship by far was with her baby sister Donna. Donna, also the single parent of two girls, was the perfect sidekick for each adventure. The two once worked an entire season as cashiers for the Cheyenne Stockcar Association and saved every penny in a Donald Duck bank to take the girls to Disneyland. As the years passed, and her girls found their own way, she decided to wander back home to Cheyenne. She soon settled into a new home, and a new job at Laramie County Community College where she worked for 25 years until she retired. She loved her job at LCCC, the people she worked with and the students she interacted with there. Along the way she found herself the grandmother of four great kids. Never the bake cookies kind of grandma, she was always quick to make sure they had what they needed (usually in the form of a check). They knew she loved them with her whole heart, as she pretended the best she could to understand the new fad, and offering to whomever would listen a quick brag on their newest accomplishment. She was fiercely set in her ways, and as the years after retirement passed, this was never more evident than her hesitancy (or refusal) to move from her home into Pointe Frontier Independent Living facility. Finally making this move she spent the rest of her days surrounded by new (and some old) friends, taking stock of the happenings and reporting those in her daily conversations with her daughter Brenda. She passed the days putting together her puzzles. Oh the puzzles, she was so happy when she would receive puzzles from her “puzzle-of-the-month” club (not a club at all, but her daughter sending her puzzles – she had to know …). A woman of strong faith, she was able to visit Billy Graham’s Training Center in North Carolina with Donna and always talked about returning (mind you she followed this spiritual visit with a Gary Allen concert, but that is a story for another day). She kept her Bible by her side and her favorite picture of Jesus by her bed. She believed deeply and was comfortable in the knowledge she would meet her Lord. Marlene is survived by her children; Myshell Lyday (Brian) and Brenda Lyday; her four grandchildren, Kayla, Ethan, Eric and Rhiannon; two step-grandchildren Max and Maddie; three great-grandchilden, Antonio, Alandria, and Alaureline; along with her surviving sister, Donna Regan and brother Don Derr. She was proceeded in death by her parents, Floyd and Helen Derr, siblings, Jerry Derr, Tommy Derr, Gwen Mizel, and Dick Derr, and husband James Lyday (she married him again – but that is also another story). A celebration of her life will be held on Saturday, November 6, 2021, at 12pm at the The Salvation Army Church, 601 East 20th Street, Cheyenne. In lieu of flowers, Marlene loved the scholarships she helped found in the name of her parents, Floyd and Helen Derr, and Tommy Derr, at Laramie County Community College; please feel free to make a donation in her name, or the charity or cause of your choice. Most of all remember to hold tight to those in your life, love fiercely, dance a little, laugh a lot and live each day to its fullest.

Marlene Lyday has left us. She finally let go held tightly in the arms of her daughter Brenda, taking with her a piece of each of us. Born, Marlene Ruth Derr in 1938 to Floyd and Helen in Doniphan, Nebraska. Marlene was soon nicknamed Cyd,... View Obituary & Service Information

The family of Marlene Ruth Lyday created this Life Tributes page to make it easy to share your memories.

Marlene Lyday has left us. She finally let go held tightly in...

Send flowers to the Lyday family.