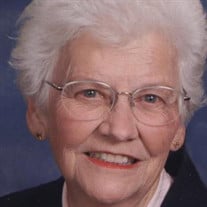 Marjorie Ann Sullivan, 89, was called home to be with her maker on April 21, 2021 surrounded by her family at Cheyenne Regional Medical Center. Marge was born on April 22, 1931 to George and Mildred Wichman in Horse Creek, Wyoming during a snow storm. She graduated from Cheyenne High in 1949 and went on to work as an operator for a short time for Mountain Bell. She furthered her professional career with Stock Growers National Bank, staying with them through many name changes, and retiring from Wyoming National Bank after 40 years of dedicated service as the Personal Banking Officer: Heritage Club Coordinator. While at the bank she helped establish the Visa charge card to businesses in downtown Cheyenne. She married Robert B. Sullivan November 5, 1955 after sparking a connection through many written letters back and forth to South Korea after his sister Charlotte asked to set up the pen pal connection. They were married for 64 years. They gave birth to two sons, George E. Sullivan in 1956 and Jay B. Sullivan in 1967. Retirement was short lasted when she went back to work for Rocky Mountain Federal until the birth of her first granddaughter Amber Sullivan in 1994. Her passion for fostering her grandchildren in their early years of life continued with the birth of Zachary Sullivan (2003), Lauren Sullivan (2004) and Brooklynn Sullivan (2006). Marge and Bob were instrumental in providing the building blocks of education and discovery in their grandchildren until they went to school. She enjoyed playing the piano and teaching the grandchildren. They then found much delight in going to the numerous honor societies, games, sports competitions and programs. No matter what her grand-kids were involved in she always supported their contributions with the purest heart. She was a dedicated affiliate of Oak Leaf Chapter #6 of Eastern Star where she served as Worthy Matron and secretary/treasurer for many years. She spent time as an Elder and member of Friendship of Mariners at the First Presbyterian Church of Cheyenne. She found great joy in planning the Horse Creek Community reunions and reminiscing on the way life was lived out West. Marge is survived by son George (Deebs) Sullivan, son Jay (Cyndi) Sullivan, granddaughter Amber Sullivan, grandson Zachary Sullivan, granddaughter Lauren Sullivan and granddaughter Brooklynn Sullivan and numerous loved nieces and nephews and great nieces and great nephews. She was preceded in death by her parents, husband Robert, and sister Helen Frye. Cremation has taken place with memorial service to follow on Saturday May 8, 2021 at 2:00 pm held at Wiederspahn/Radomsky Chapel of the Chimes located at 1900 E. 19th Street Cheyenne, Wy 82001. The service will be live streamed at www.wrcfuneral.com beginning at 2:00 pm. Memorials may be made to the Shriner’s Hospitals for Children.

Marjorie Ann Sullivan, 89, was called home to be with her maker on April 21, 2021 surrounded by her family at Cheyenne Regional Medical Center. Marge was born on April 22, 1931 to George and Mildred Wichman in Horse Creek, Wyoming during a snow... View Obituary & Service Information

The family of Marjorie A. Sullivan created this Life Tributes page to make it easy to share your memories.

Marjorie Ann Sullivan, 89, was called home to be with her maker...