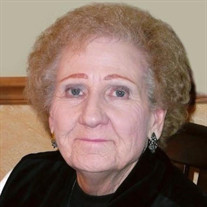 Longtime Cheyenne resident, Margaret “Joan” Grott passed away July 27, 2021, from an abdominal infection. She was 91. She was born December 13, 1929, to Leah (Mills) and Carl Leonhart in Giltner, Nebraska. She attended and graduated from Litchfield High School in 1948. After graduation she moved to Cheyenne and worked at Memorial Hospital as a nurse’s aide and later became a surgery technologist. She worked much of her career for Dr. McGonigle as his medical assistant and retired in 1985. Shortly after moving to Cheyenne, she met the love of her life, Richard Louis Grott at the Cheyenne 120 Club. They were married on March 5, 1955. They were married 56 years before his death in 2001. After Rich’s death, Joan found comfort in her many friendships at the Moose Lodge and her Tuesday night dinners at Casa de Trujillo with friends. Joan enjoyed making rag rugs, dancing, and traveling. Her love for dancing led her to Knoxville where her and Richard appeared on Club Dance TV show. She was also a member of the Cheyenne Polka Club where she met many wonderful people and traveled to Polka dances in the area. She loved spending time with her grandchildren and attending all of their sporting events. She was famous for her delicious pies, cinnamon rolls, and raisin cake. One of her favorite music groups were the Lennon Sisters, and their Christmas album was always playing on Christmas Eve. She had a silver Christmas tree that was always decorated with red bulbs, as red was her favorite color. Richard Grott used to say, “The Golden Years aren’t so golden”. For the past 9 years she’s suffered the horrible affects of dementia. She lived her past 7 years in a memory care unit at Aspen Wind. Talking about her time on the farm, milking cows, helping her dad in the field, riding her beloved horses, going to the one room schoolhouse and all of those fun Saturday night street dances helped her relive a wonderful part of her past. She was preceded in death by her husband Richard Grott in 2001. Her parents Carl and Leah Leonhardt, sisters Bonnie Stephens and Lavonna Leonhardt as well as a brother, Alan Leonhardt. She is survived by her daughter Lorinda Foster of Riverton, her son Byron Grott (Laura) of Cheyenne. Grandchildren, Lindsay Bugas (CJ), Lacy Hall (Tom) and Kyle Grott, all of Cheyenne. Three great grandchildren, Aubrey and Blake Bugas and Aubrey Hall as well as her brother, Norman Leonhardt of Broomfield, Co. She also had many great caregivers over the years especially Beth Hunnel and Louise Raimondi. A graveside service will be held on Friday, July 30 @ 11 a.m. at the chapel at Memorial Gardens.

Longtime Cheyenne resident, Margaret &#8220;Joan&#8221; Grott passed away July 27, 2021, from an abdominal infection. She was 91. She was born December 13, 1929, to Leah (Mills) and Carl Leonhart in Giltner, Nebraska. She attended and graduated... View Obituary & Service Information

The family of Margaret "Joan" Grott created this Life Tributes page to make it easy to share your memories.

Send flowers to the Grott family.